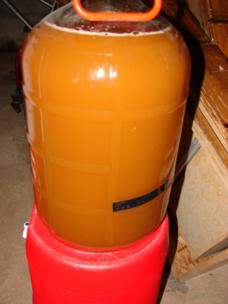 Name:  Christopher Graf aka The Abbot What got you into homebrewing? A person? An unfulfilled interest?  Sheer boredom?
This answer has many parts.  I had always been fascinated with the idea of brewing my own beer, but had never taken the steps to do so.  After a trip to Europe with some friends (hitting many a brewery along the way), I decided I wanted to try and emulate some of the beers that I had had.  With encouragement from one of my traveling companions, himself a homebrewer, I took the plunge.  I returned home and sought out a local homebrew
shop to get started.

Where do you brew? Inside/outside?
I brew inside in the kitchen.  I get away with it because I clean up behind myself and because I brew my wife her favorite beer at least once a year.

Where do you ferment?  Have you had to do anything creative to facilitate this?
I am lucky enough to have a walk in basement under 1/3 of my home.  It is perfect for fermenting.  There is also plenty of shelf space for the finished product.

Do you have a pet name for your homebrewing enterprise?  If so, can you give us a little background?
Nothing fancy.  We call it the Grafhaus Brewery.  Yeah, I know, lame.

How large are your batches?
My batches are only 5 gallons at the moment, but by the end of the summer I hope to increase that to 10 gallon batches.

What kind of equipment do you have?
For the most part I have the standard homebrew setup.  Fermenting bucket, brew kettle, associated brewing tools.  I did luck out a while back and was given a good deal of equipment by a friend of a friend.  That included 5 glass carboys, a burner, hundreds of bottles and a lot more.

Are you fine with that or do you expect to upgrade to bigger and better?
I expect to move to a bigger setup.  I am in the process of building a brewing cart that I hope to someday build out to a HERMS system.

What are your favorite styles to brew?
I don’t have a favorite style to brew.  I brew whatever I feel like brewing at that particular time.  I have brewed from porters to Belgian dubbels to hefeweizen to lagers.  I do make certain beers each year.  A lager and hefeweizen are always brewed in the early summer.  The hefeweizen to drink all summer and the lager ready for my annual  Oktoberfest party.

All grain/Extract or both?
Right now it is still extract.

How many batches have you made this year?
I have made two batches this year and have three more to make within the next month.  Plus a batch of mead.

Give us some examples and the names you picked out for them if you gave them a name.
I dont really name them.  I just drink them.

Any bad batches?  Were you smited by the homebrewing gods?
I had a Christmas ale not turn out due to inadequate yeast.  I am pretty meticulous when brewing and moving, so luckily I haven’t had a spoiled batch.  I expect I will eventually, but so far I have been lucky

Brewing plans for next year?
Of course I will be brewing the ones referenced above (my every year beers).  I am going to probably also round out my English beer experience with some pale ales, perhaps an IPA, a baltic porter and a stout. Plans on entering any competitions?
If I have some finished beers available, I will probably look around for a competition or two to compete in.  I have a young Belgian dubbel that I am curious to see how it matches up.

Any awards from past competitions?
I won a third place in the Porter category in the Piedmont Brewers Cup last year.

Any advice you’d like to give other homebrewers?
Buy a house with a basement.  All kidding aside, just brew what you want and like.  Use all available resources when brewing (books, the Internet, your local homebrew shop).

Any closing thoughts?
Enjoy it.  The entry fee is modest, the learning curve (depending on what you want to make) is not steep and the reward is being able to say “I made that”.   I learn more about beer every day just by brewing my own.  My best moment in homebrewing was being able to invite my friends to join me.  The are now homebrewing on their own and continue to bring others into homebrewing.