From the birthplace of the ubiquitus ‘Jeep’ we have our latest interviewee. Taking time from his continued climb up the brewing ladder to answer these hard hitting interview questions (ha). Like many we profile here, this individual has made his way from homebrewer to pro. As you’ll see though, this didn’t happen overnight. The next Head Brewer to sit in the Comfy Computer Chair of Fame, let’s welcome Nate Bacher. Brewery Name: Recon Brewing (Have a look at the brewery notes for the explanation of the ‘Jeep’ reference)

Is it automated or is there a lot of exercise involved in your brewery’s operation?
There is quite a bit of exercise during a brewday….my excuse for never going to the gym. We do have an integrated manifold between the mash tun and boil kettle with mounted pumps all pre-piped and controlled from the main panel. It’s about as automated as I would like it to be. Describe your perfect beer day (outside the brewery). For example, a day with family or friends at the brewery, a picnic with family or just a quiet day at home (sipping your brewery’s beers).
Any day with beer is a perfect day but if I had to pick one I would say my favorite is to go to our brewery with my dog Barley, sit on the back patio around the fire pit, beer in hand and mingle with our patrons. Most not aware, at least not initially, that I am the brewer and one of the owners. It is a humbling, enjoyable experience to see our place through their eyes, ears and taste buds. I did that last fall and have thought about it a lot since, can’t wait for warm weather to do it again. 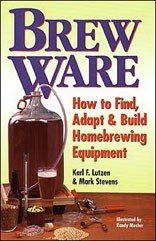