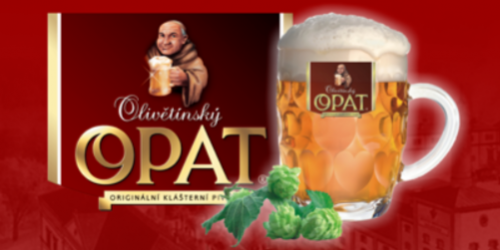 imageIn the picturesque landscape of eastern Bohemia behind the wall of Broumov rocks and in proximity of famous Adrspach sandstone rock-city we can find Olivetin. It is a part of Broumov where one of the oldest cloistral breweries in the Czech Republic was built. The brewery carries the torch of Benedictine brewery which was previously located in the Broumov monastery. Since the original monastic brewery burned down several times the church authorities decided to position a new brewery outside of the monastic enclosure. This brewery was constructed between the years 1712-1714.

Brewery Broumov was reconstructed and modernized recently. It produces a wide range of beers which are sold under the brand name ‘Olivetinsky Opat’ which means ‘Abbot from Olivetin’. Beer made here can be dark, light or special. It is a typical representative of so called ‘Czech beer’ which is characterized as ‘like bread’, with pleasant hops bitterness and bite and gold-yellow colouring. All these attributes are preferred by Czech consumers.