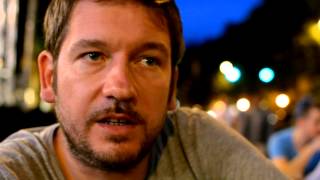 {xtypo_dropcap}H{/xtypo_dropcap}ello good people of the internet. We bring to you today another of our interviews with industry professionals. This time we could not get this person to sit in the Comfy Computer Chair of Fame, so he did his interview from the park bench of fest (you'll understand).

The interview is a talk with Daniel Bart, organizer of Főzdefeszt. Főzdefeszt is Hungary's largest microbrew beer festival in a country rapidly expanding it's craft beer offerings. Daniel talks to GrafStout about the evolution/revolution of the festival, micro brewed beer in Hungary (GrafStout resides in Budapest) and some of his festival favorites.

Note: This is GrafStouts first in person inteview, so be gentle. Also, there is some colorful language so if played at work one might turn their sound down as to not offend.

We hope you find the interview mildly interesting. Please let us know what you would like to see, or any comments about the video itself.