Like most breweries, Brasserie de Brunehaut has their stable of standard beers (by Belgian standards). These include a blonde, a dark and a tripel all brewed under 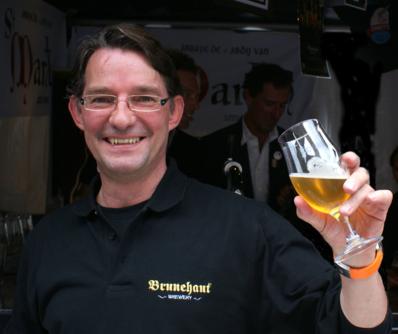 the Abbeye St. Martin banner. What is setting Brunehaut apart is their additon of a completely organic line of beers. The brewery grows its own barley and wheat and in a nod to the green movement, packages some of their wares in recyclable kegs.
We had to the opportunity to interview the man in charge of it all, Mr. Marc-Antoine De Mees (Director of Brewing and CEO of Brunehaut), about his thoughts on the brewery and the brewing industry in general. So, from the transatlantic comfy computer chair of fame, our interview with a brewer trying to make a difference in the world (however small).

Read on my friends...

Where is the brewery located? Has it always been there?
In Brunehaut – south Belgium, near Tournai. For the 100th anniversary in 1990, the brewery moved a few miles from its original location into two modern buildings and a shipping warehouse.

How large is Brasserie de Brunehaut?
The brewery is huge! (laughing) We brewed 3000 hl last year. That represents 2 minutes and 23 seconds of annual AB-Inbev production. That Einstein fellow wrote about the law of the relativity. Brasssserie Brunhaut is relatively microscopic.

Is there anything about your brewery that makes it unique? Or is it just a bunch of shiny metal and hoses?
First, being from 1890, our brewhouse features some old (not so shiny anymore) copper. Many Belgian brewers believe copper gives the magic touch in the mashing of the brew.... and eventually makes the best beers.  Something unique to us is that we grow our own barley our own farm. So, we maintain quality control from the field to the glass! We are also constantly researching and testing “legacy” barley varieties, hoping to yield even more body on our beers.

How long have you been director of brewing operations there?
I took over this brewery five years ago, in 2006. At that time, it was in very bad shape. We’ve increased turnover 300% since then, primarily by expanding
our exports from 20% to 70% of our production. We now export in 25 countries. We think this represents solid growth, in a tough economy.

Any type of formal training in brewing science or art?
Yes, very formal, or more accurately familial. My grand parents owned a “geuze” brewery in Brussels (Emile & Louis De Coster – now “Belle Vue”). So, beer is somewhere in my blood.

If you will, a brief history of your brewing/brewery experience (where have you brewed)?
By “accident”, I spent ten years leading a manufacturer that sold brewery equipment all over the world. I sold to breweries worldwide and I had the chance to learn the high end of the brewing technology. This experience helps us everyday, and we have a fantastic young brewmaster who manages production when I travel. 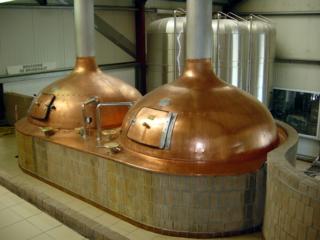 Are there any differences in attitude (in craft/artisinal beer) between Belgium and America?
From our side, yes. As Belgians, we look for more balanced products than many of our North American colleagues. I love balanced beers and balanced wines, and I would not like to make a beer with such extreme taste as to hide the rest of the recipe. In other worlds, I am not a fan of “Triple IPA” or extreme high alcohol beer with no carbonation. You should have pleasure to drink a beer.

Is the brewery automated or is there a lot of exercise involved in your brewery's operation?
We have a reasonably modern automated bottling and labeling process, good steam and a good team. We are well scaled for our ambitions. That’s the most important!

Has the brewery ever had a bad batch? If so, how long did it take you to figure out what caused it?
Yes it happened. Once, our yeast was a bit weak. Giving a lot of flavor but weak... So, it was “Beer Star Wars” in the fermentation tank and the Lactics won against the Brunehics. The yield was a poor geuze.

Do you personally name the brews or is it done by committee or dictatorship?
As we don’t produce short-term products there are few naming chances. Our Abbaye ales are named in the traditional Blonde, Dubble (brune) and Trippel way. Still, if a beer needs to be named, no focus group will be organized. I will name the next one as a local Dictator (good idea).

What are your favorite styles? Do you make them at the brewery or will they be made?
I like Triple blond and the one I prefer is ours... If not ours, a classic Westmalle triple is not so bad ;-).

Do you or your brewery attend the large beer gatherings (i.e. Great American Beer Festival, Zythos, etc.)?
We were at Zythos in Philly last year, Belgian Beer Weekend each year, and lots of other local Belgian festivals.

Can you give a hint if anything might be coming from your brewery (new brew, special brew, etc.)?
A new Quadrupel is under development. We have already brewed a first 200 liters test batch. We are currently selecting the right yeast. It will be GREAT!

Do you have a favorite beer and food pairing?
I like to cook rabbit with Saint-Martin blonde, served with the same beer, but I understand Americans don’t eat much rabbit.

Every workplace has some type of tradition. Does your brewery have some type of tradition on brew day or at another time? For example, using a special tool that has been around for a very long time, play specific music while brewing, etc.
I often listen to U2 or Muse in my office, but no special brewing voodoo. Everything is already covered with tradition and our special Belgian brewer dust. 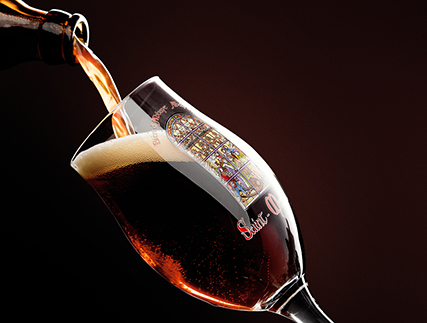 Belgium, known for its centuries old brewers and styles, do you see artisan/craft beer as a growing presence?
More and more, which is very good. The new breweries are driving quality, innovation and a more evolved consumer palate.

What was the idea behind recyclable kegs? How have they been received (do people like them)?
My experience is that you have two types of people and organizations. “The conventional” and “the curious”. “Conventionals” are sometimes suspicious of our recyclable kegs. The “curious”, on the other hand, are almost always pleased that our recyclable kegs display a CO2 footprint that is 15x less than a stainless steel keg and … that, ultimately, our beer will cost less.

What was the idea behind your organic beers? Was it a conscious decision to grow your own ingredients? An experiment in sustainability? Etc.
It is a long story.... We really should discuss that face to face. They is so much to say. As a brewery manager, I believe we must act properly in my sphere (is it clear?). Since I took over this brewery, our major decisions are always a balance between environmental responsibility and economic goals. As my wife was a farmer, we decided to grow the barley at home, and this year, we are converting the whole farm into organic. Another challenge!

I’m also looking to build a biomethanisation plant, near the brewery, to produce gas (and then electricity) using brewery waste. Spent materials coming out this plant will be used as organic fertilizer for our farm, closing the loop!

Has the market embraced the Organic line?

Yes! It is a fine market for Belgian craft brewers because the big brothers don’t care about it. Moreover, our new Gluten-Free ales are really a sub-niche in the niche market. It is a perfect market for 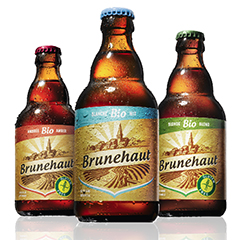 our strengths : being good, the best, quick and flexible.

Gluten-Free is a fast-growing market. We have the chance to serve celiac sufferers with REAL Belgian ale. I love the fact that our two new gluten-free labels are so good that many non- celiac sufferers are ordering it.

With three separate brands already in house, do you think that Brasserie Brunehaut has reached its capacity? Or is there still room to grow?
We don’t need the heavy automation of our larger colleagues. So with a production capacity of 10 000hl we will stay “craft” or “artisan”, although we intend to grow slowly and responsibly. I earn enough money and our business model hopes to prove that giant scale is not the only definition of success.

If one of the brewing behemoths (InBev/SAB, etc) came calling, would you turn them away, or invite them in for a beer?
Everybody is invited to taste a GOOD beer in our brewery. I’ll guide the tour and pour the beer myself.

Your social media presence is pretty impressive, do you think it has had an affect on beer sales?
Our American Social Media Director does an incredible job. He lived in Brussels for several years and internationally for a long time. This is important because it helps our Twitter voice and content be authentic, consistent and global in scope. Our social media yield combines PR, branding, event promotion and CRM. We “tweet” in three languages and feel we’ve developed some of the brewing industry’s best social media practices.

But, to answer your question, Twitter’s sales impact and ROI seem impossible to precisely quantify. Still, we have clearly reached deep into the global craft beer community. For example, just this month I’ve done 3-4 interviews (like this one) that contacted us directly via Twitter. With our small scale and global clientele, social media seems our best, most budget-friendly option.

If you were in charge, what would you change (first) to improve our beer universe?
Prevent major brewers from FORCING consumers to eat and drink their chemical products. But in fact, the problem is more about consumer awareness. That’s
the problem.

Visit them on the web at Brasserie De Brunehaut or have a look at their Wikipedia page: Wiki-Brasserie Brunehaut