Interview with a Homebrewer - The Duke of Brewing

After a long haitus, we are back with a new homebrewer interview. Hailing from Durham (NC and not England) we welcome a homebrewer that is pretty new to the hobby. Nonetheless, he seems to have taken it to heart and is enjoying the fruits of his labors. Welcome to the Comfy Computer Chair of Fame, Mr. Bryan Roth. 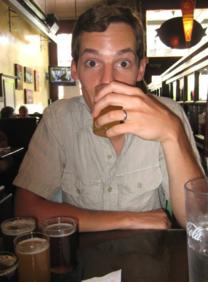 When did you start homebrewing?
November 2011. I bought a starter kit from Northern Homebrewer and a recipe for a extract/steep cherry-chocolate stout. Oddly enough, my brother was planning to get into homebrewing at the same time, unbeknownst to me. We both starting brewing that fall.

What got you into homebrewing? A person? An unfulfilled interest?  Sheer boredom?
A little bit of each, I imagine. It wasn’t until 2007 when I started trying to really enjoy craft beer and it took me a couple of years to get to the point where I wanted to know more about what went into making such a delicious drink. I made a friend in Durham who also happened to be a homebrewer, so I joined him for all-grain brew days and got hooked. I bought my starter kit and was on my way.

Do you belong to a homebrew club?  What is it?
I will VERY rarely attend a meeting of the Triangle Unabashed homeBrewers club, or TRUB. It’s a group that meets once a month in Durham.

Where do you brew? Inside/outside?
My wife can’t stand the smell of boiling wort – we all have our flaws, don’t we? – so I was sent outside. I’m lucky that my home has a small concrete patio slab, where I set up a turkey fryer and my six-gallon brew pot. I always brew early in the morning on weekends so I can clean up and have the rest of the day ahead of me.

Where do you ferment?  Have you had to do anything creative to facilitate this?
I have portions of two closets in my home for beer storage. I ferment in carboys in a downstairs closet where temperature ranges are consistent and bottle condition in an upstairs closet.

Do you have a pet name for your homebrewing enterprise?  If so, can you give us a little background?
When my wife and I first moved to Durham we adopted two cats, so when I was trying to come up with something to call my “brewery” my wife thought it would be cute to name it after them. Dos Gatos Homebrew – was born. We even created a label to slap on bottles from time-to-time.

How large are your batches?
I stick to five-gallon batches, which usually gives me anywhere from 42 to 50 12-ounce bottles worth of beer. The I’ve topped out at 50 with a batch of watermelon wheat beer because I added what was probably about a gallon of watermelon juice on top of my wort. 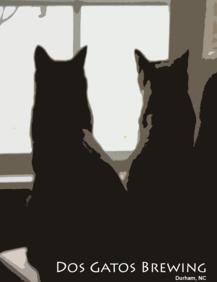 What kind of equipment do you have?
Nothing fancy at all. I use a six-gallon glass carboy as my primary fermenter and I have two five-gallon carboys for secondary. I use a turkey fryer to boil the wort in my six-gallon pot and otherwise just use a bucket to aid with sanitization and an auto-siphon to move the beer around. I try to keep the amount of space my equipment takes up to a minimum, which is also why I extract/steep instead of brewing all-grain.

Are you fine with that or do you expect to upgrade to bigger and better?
I had a fellow homebrewer once tell me that extract brewing “takes half the time and you get 90 percent of the flavor” compared to all-grain brewing. I’m sure there are plenty of people who might disagree, but I think if you do things right you wind up with good beer no matter how you make it. I love the fact it can take four hours on brew day from pulling out equipment to having it clean and put away. Keep it simple.

What are your favorite styles to brew?
I only make ales and my first few batches were more experimental than anything else. I made a blonde ale but “dry-peppered” it with jalapenos and habaneros, which was definitely unique (and just the right amount of heat). I’ve made a watermelon wheat with juice I squeezed from watermelons and a blueberry wheat with four-and-a-half pounds of locally-picked berries. My favorite has been a honey-basil ale with basil from my backyard.

I’m trying hard to now hone some IPA recipes, so that’s probably what I’ll be making consistently in the future. I really like the idea of having a “house” IPA around at all times.

How many batches have you made this year?
Not nearly enough. Only four or five, but I still have a few bottles sitting around and I plan to restock soon enough.

Give us some examples and the names you picked out for them if you gave them a name. 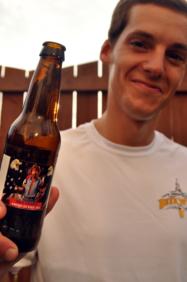 My jalapeno blonde ale was “Hot Blonde Ale” and my last batch – a double IPA – was called “Lil Hop Monster.” My first batch I made was a straight American pale ale which I called “True Patriot American Pale.”

Any bad batches?  Were you smited by the homebrewing gods?
I’ve been very lucky that my paranoia with cleaning has allowed me to avoid infections. The only batch I regret is a version of Poor Richard’s Ale I brewed and missed the original gravity projection by quite a bit. I was in such a rush to get it done I pitched two packs of yeast when I only needed one. The beer didn’t turn out bad – it was certainly drinkable – but it had a very distinct bready taste and every bottle had a thick cake of leftover yeast at the bottom.

Brewing plans for the future?
I really want to perfect a recipe for a session IPA.

Plans on entering any competitions this year?
I have never entered any competitions and don’t know if I will. It seems silly, but I’d guess it’s mostly because I’m afraid what I make would taste terrible to someone who really knows how to analyze a beer.

Any advice you'd like to give other homebrewers?
Relax. Don’t worry. Have a homebrew. That cliché enough?

Honestly, just have fun. I approach brewing like I approach making food in the kitchen – it’s an experiment and even if you screw up, you’re aiming to make something that you want to enjoy.

If you could sit down with 1 person (living or dead) and ask them questions.  What brew would you offer them and what would be the first questions you would ask?
I guess it’d be Michael Jackson, the English beer writer. He’s a godfather of the modern craft beer movement and I’d love to hear all his stories about traveling and promoting the world of beer before it was where it’s at today. I’d need some help, but I suppose I’d want to brew him a proper British mild ale, cask conditioned, of course.

If you were omnipotent, what would you do to right the beer universe?
Pliny the Elder, Heady Topper and Kate the Great for all!

Favorite domestic beer?
Ithaca Beer’s Apricot Wheat. It’s a total nostalgic, homer choice, but it’s a beer I “grew up” with and could drink for hours.

Favorite imported beer?
My brother smuggled me a bottle of Orval straight from the brewery in Belgium. That was a special beer and a special drinking occasion.

Married? Children?
Married, no kids, but sometimes our two cats make up for that. 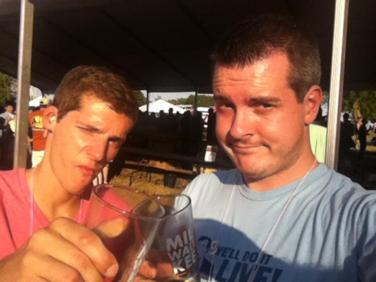 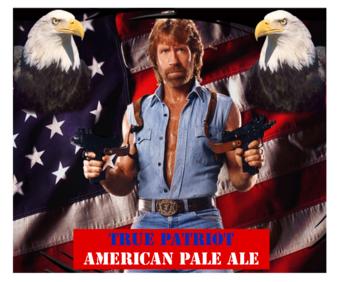 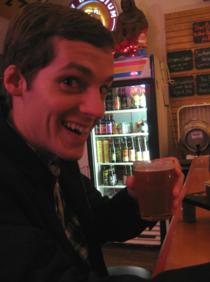