Interview with a Homebrewer - For the Love of Beer

It's been a while since our last homebrewer interview. So, up now in the Comfy Computer Chair of Fame is a homebrewer hailing from Florida who seems to have his homebrewing priorities right up front. With hockey and homebrewing he seems to be a very happy man. Welcome to CellarMonk Mr. Kyle Love. 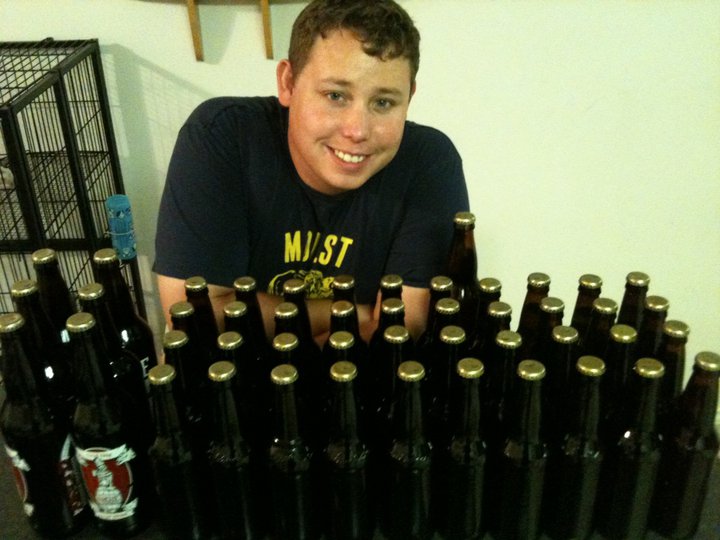 When did you start homebrewing?
Feb 2010

What got you into homebrewing?
I was working in Tampa for a couple days and was staying next to the Yuengling factory, I saw they had a gift shop and thought I'll grab a shirt since I like the beer. Well it was closed but I saw they had a tour around "lunch" everyday, so based on my schedlue I said sure why not, during this tour I meet a local kid and we started talking and eventually he told me about him making beer with "Mr Beer" so I ventured into it. Soon as I tasted the first batch I knew this was not enough but I loved the process.

Do you belong to a homebrew club?
I do not, I know we have a couple around the Ft Lauderdale area and know one or two members from them but cant seem to ever have the time to go to one of their meetings. I keep an insane schedule most of the time. There are two in the area that I know of.
FLAB Ft Lauderdale Area Brewers, Misfits - Miami

Where do you brew? Inside/outside?
I still have my extract equipment so I can brew indoors but i keep my boil kettle on the back porch. So I mash in the kitchen to save some propane. ( at least in my head this is a good idea)

Where do you ferment?
Depending on what im fermenting Meads/ Apfelwine are fermented in the living room under the table and I also built a temp control (BYO build) for a full size fridge in the garage.

Have you had to do anything creative to facilitate this?
I built the temp control and i also have used the bucket and ice jugs method as well. 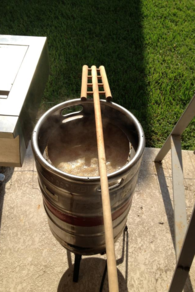 Do you have a pet name for your homebrewing enterprise?
I like to call it the Pucked up Brewery. I'm a huge hockey nut and most of the beers I make I share with the mens league I play in.

How large are your batches?
Typically I do 5 gallons. I have done a 10 gallon batch and had a few issues that were my own doing. I was brewing downstairs but kept running up and too vigorous of a boil led to multiple boil overs.

What kind of equipment do you have?
Currently I have 2 Keggles that I can use as a HLT and Kettle. I have 1 5 gallon Gatorade mash tun with a braid hose and a 10 gallon gatorade with a braid hose. I have a bayou classic burner about 11 5-6.5 glass and better bottle carboys, around 20 cases of bottles plus 3 kegs and a beer fridge dedicated to those. I use a stir plate and my favorite piece is my refractometer.

Are you fine with that or do you expect to upgrade to bigger and better?
I'm happy with what I have currently, although I would like to build out a fermentation chamber instead of a fridge so I could store more.

What are your favorite styles to brew?
Porters

How many batches have you made this year?
This year I've only been able to brew once as I had a very busy beginning to my year with Hockey and my business.

Give us some examples and the names you picked out for them if you gave them a name.
Guadal Canal IPA- Japanese Hoped American IPA WWII reference
Barrel of Kraken Porter- Oak chips soaked with Kraken spiced Rum in a porter
9Lb Pumpkin ale - I used 11 pounds of pumpkin whole that I baked and scraped down and used in the mash I assumed a 2lb loss to the skin
Face Fister IPA- Norther Brewer Ryans Face Puncher recipe with a few additions
Marked Oaked Porter- Oak Chips soaked with Makers Mark in a porter

Any bad batches?
Had one that had acedlaldhyde and tasted a bit like bandaids. Had a kegarator that died and 3 months later i tried to drink the beer. It was rancid. I've overcarbed a few lately, still drinking them though. I made a lemon wheat that took on a Belgian taste to it and although not the first intention its quite good.

Brewing plans for the future? 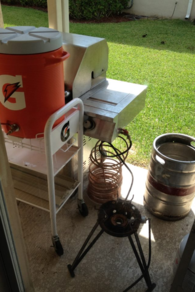 I've got a freezer full of grains and a fridge full of yeast, just need to find some 6hr time blocks that I can brew in.

Plans on entering any competitions this year?
I want to, just seems I miss the deadlines for entry. Need to play closer attention.

Any awards from past competitions?
No

Any advice you'd like to give other homebrewers?
Cleaning and sanitation are 80% and can't be shorted. The yeast are born to work, give them what they need! Dont get flustered or too over sensitive.

If you could sit down with 1 person (living or dead) and ask them questions.
Vinny from Russian River.

What brew would you offer them and what would be the first questions you would ask?
One of my Barrel of Kraken porters, "What started you into brewing sours?"

If you were omnipotent, what would you do to right the beer universe?
I'd bring back the brewing records that are lost and destroyed for styles and recipes lost to histroy

Favorite beer and food pairing?
I typically don't drink beer and eat at the same time.

Married?
No, living with my girlfriend for the past 7 years. No children.

In the kitchen I make a mean... (beer related).
I've made spent grain bread a few times and really enjoy it. I'll have to explore some cooking with beers more 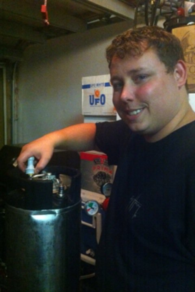