Interview with a Homebrewer - Flat out Brewer

What happens when you combine two parts hydrogen, one part oxygen, some different styles of bere (look it up), the transfer of thermal conditions, the addition of 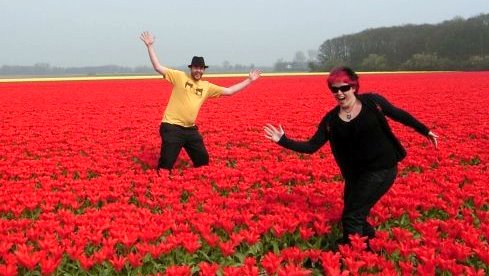 Saccharomyces cerevisiae and time.  Well, the latest homebrewer to sit in the comfy computer chair of fame could tell you.  Hailing from the lovely (when the sun is out) city of Edinburgh, Scotland, brewing beer in their kitchen, known to the Twitterverse as @Sevarity, Scientist and beer lover, welcome to CellarMonk!

When did you start home brewing?
Our first brew was in November 2008 when we lived in Ely, Cambridgeshire (England). We made a Kvass (fermented with rye bread) which was an epic fail! It was so thick I took it to work and centrifuged it to get rid of the chunks. Even then it was still quite thick and syrupy. Blegh!

What got you into home brewing? A person? An unfulfilled interest?  Sheer boredom?
At first we wanted to make something different (the Kvass) and then we started home brewing to save money. Then it evolved into making beers that we really enjoyed but couldn't get easily. If anyone inspired us it would have to be the following: Dominic Driscoll (Thornbridge Brewery), Janine Shorrock (Ashover Brewery), Eugene Tolstov (beer legend from Moscow) and Colin Stronge (Black Isle Brewery). We met them at Bruxelles-midi train station on our way to the 18th Weekend of Spontaneous Fermentation in Opstal, Belgium 2009 (one of the best beer festivals EVER!).

Do you belong to a home brew club?  What is it?
When we moved to Edinburgh, Benjii did go to some local meetings, but I never attended as it was an all-male pie-eating fest!

Where do you brew? Inside/outside?
In our Kitchen

Where do you ferment?
Have you had to do anything creative to facilitate this?Wherever there is space at the time. Either the kitchen, lounge room or even the bath if we are expecting an initial burst of crazy fermentation! Living in Scotland it does get rather cold, so fermentation vessels are usually near a radiator to keep warm. Or they get a jumper

Do you have a pet name for your home brewing enterprise?  If so, can you give us a little background?
We're currently tossing a few ideas around for our brewery name.

How large are your batches?
Normally 22L, but I have done a small 5L batch (Sevvy's Saison) and our meads/melomels are always 5L. 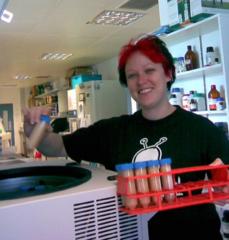 What kind of equipment do you have?
Most of our equipment has been modified from things I can get from work. Our mash tun for example, used to be a water vessel in one of the labs and our FVs also come from the lab. I have a water bath to culture our yeast and we have two big pots for the boil. We are quite lucky that our local home brew store is only a 4 minute walk away.

What are your favorite styles to brew?
Benj loves to brew beer with different ingredients. Today we are making a Pumpkin Ale and he has also made a beer with raisins (The Age of Raisin). I personally like strong super hoppy beers which helps when you have a freezer full of hops

All grain/Extract or both?
Our first few brews were extract, then we went partial. Now that we have our super mash tun we brew all grain.How many batches have you made this year?Roughly 10. We have been extremely busy this year and so haven't brewed as much as we would have liked. Also, we are running out of space in our flat to store all this beer!

Give us some examples and the names you picked out for them if you gave them a name.
Frozen Donut IPA: 7% double IPA. Brewed on my (late) grandmother's birthday and so was named after her (she used to give my friends frozen donuts when I was young). Bohemian like Ewe: hoppy pilsner using hops from New Zealand. Epic Beard: rauchbeer. Brunstfield Abbey: a trappist beer (we live in the area of Bruntsfield).

Any bad batches?  Were you smited by the homebrewing gods?
We tried to make a clone of Brewdog's AB04 but put too many cocoa nibs in. It's way too bitter (in a bad way) but looks really nice!Brewing plans for next year?We hoping to do a collaboration brew with an established brewery. Fingers crossed! 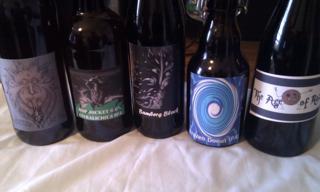 Plans on entering any competitions?
I wanted to enter my Sevvy Saison into the Thornbridge competition this year, but they wanted 500ml bottles and I had only bottled 330ml.

Any advice you'd like to give other homebrewers?
All grain is definitely the way to go! Trying brewing in a bag to see if you like it before investing in a mash tun (that's what we did).

Any closing thoughts?
I wish we had a bigger pot.