Interview with a Homebrewer - Brew Duo

The homebrewing community is thought to be one of the solitary brewer standing forth at his mash tun or brew kettle, contemplating his next step or next brew.  Yes, there are homebrew clubs and such, but rarely do we get to see a couple that actually brews together.  Past experience, and quite a few, "That's nice, honey" has this writer heard from his own spouse while brewing.  We are excited to bring to CellarMonk our first husband and wife brewers.  From the way it sounds, this will be a lifelong endeavor.  Please welcome to the Comfy Computer Chair of Fame (Lara, women first ya know) and to the Not So Comfy Folding Chair of Fame (Paul).  Our first Brewing Duo! 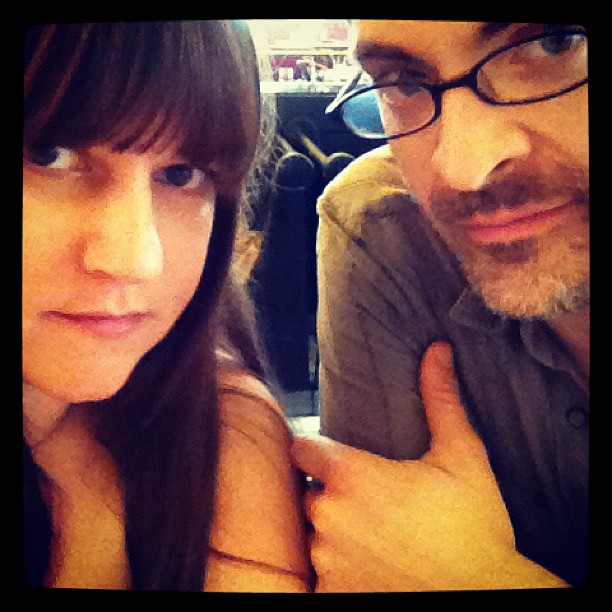 Day Job(s):
Paul: I'm an editor. I read medical research by day and books by night.

Lara: I work in the furniture industry, space planning and selling furniture for commercial dining spaces.

When did you start homebrewing?
Lara: I bought Paul an extract kit for Christmas in 2010. Our dog broke into the recipe box under the tree and ate most of the malt extract. The living room looked like a Columbian druglord had a party at our house--white powder everywhere. I just bought more extract, and put the box way up high!

Paul: That first beer was a tripel, maybe not the best choice for a first-time homebrewer. We won't talk much about how it turned out. Plums and lighter fluid come to mind.

What got you into homebrewing? A person? An unfulfilled interest? Sheer boredom?
Lara: We kind of got each other into it, after constant beer-drinking research together.

Paul: And the more we researched the more we wanted to understand exactly what we were drinking---what we liked and why we liked it. Trying to brew it ourselves seemed like the best way to do that, and even though that first beer was a failure, we knew right away we were into this for good.

Do you belong to a homebrew club? What is it? 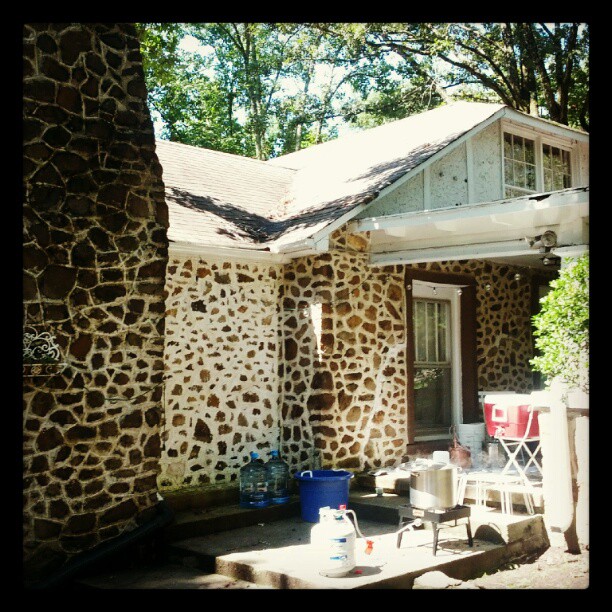 Lara: We are kind of in two homebrew clubs. Because we are obsessed, and they are really fun.

Paul: Yep. Nash Street Homebrew Club in Hillsborough, NC, and TRUB in Durham, NC. This is good for everyone, to be honest. We're able to talk at length with fellow obsessives without braining friends and family with all our beer blather. Plus, some of the best beer we've tried this year has come from bottles and growlers passed around at club meetings, which is really inspiring. I still think of the open-fermented, barrel-aged gose a friend of ours brought to a recent meeting.

Where do you brew? Inside/outside?
Paul: On our front porch. We'll brew under the covered portion when it rains, but we like to be exposed to the elements on brew day.

Lara: We have these big wide steps that give us a kind of pre-existing gravity system too. Very handy.

Where do you ferment? Have you had to do anything creative to facilitate this?
Lara: Depends on the beer. We have a nice cool shower stall, a warm attic, a drafty bedroom, and a kegerator for lagering. The kegerator build was intense. I built it in three days, rushing so it would be ready for a marzen Paul was brewing at the same time. I finished it literally as the yeast was pitched. It came down to the wire.

Paul: That's the charm and curse of living in such a drafty old house. Any given day, you'll find us hustling carboys and buckets from one of these spots to another. Beyond that, the most creative thing we do is the standard cold water bath, swaddling a fermenter in t-shirts and submerging it in a few inches of cold water to drop the temperature a few extra crucial degrees.

Do you have a pet name for your homebrewing enterprise? If so, can you give us a little background?
Lara: Not yet. We've started naming all of our beers, but we don't have a name for our homebrewery. We brainstorm about it a lot though, usually over beers.

How large are your batches?
Paul: Five or six gallons, which is about all our kettles and carboys can manage at the moment. 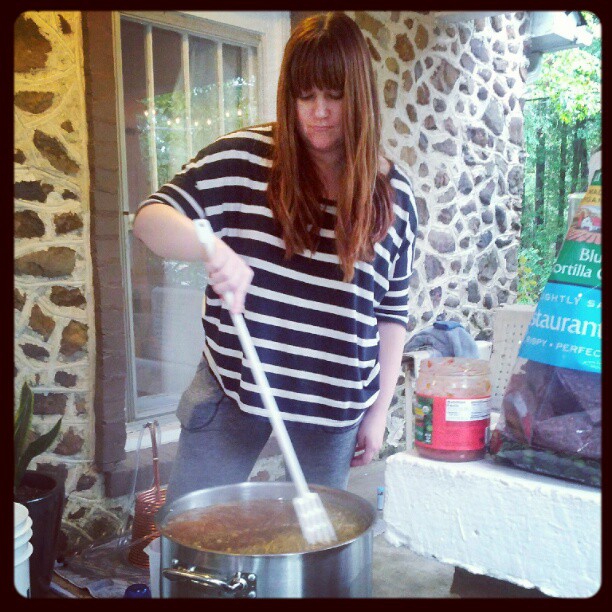 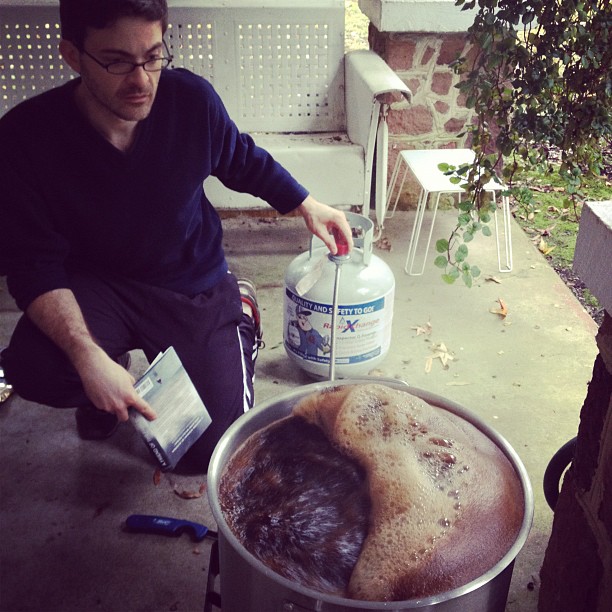 Lara: We use a propane turkey fryer and two big stainless steel boil kettles: 5 gallons to heat the sparge water, 8 gallons for the actual boil. For our mash tun, I converted a Coleman cooler with copper pipes, some copper wire, and a stainless steel mesh hose meant for a washing machine. We may need to upgrade this soon. We've used it for two years and it is getting harder to take apart and clean thoroughly. It's a little scratched up. The kegerator is my pride and joy, though. Lots of our accessories are from our first brew kit.

What are your favorite styles to brew?
Lara: I love Saisons, Belgian varieties, IPAs, English Style Bitter, Pale Ale. I'm not big on stouts. I feel like this is a personal failing, I hope to learn to love them more.

Paul: The breakfast stout we just brewed was good, lady. You can't deny it. I'm a big fan of the oddball esters and phenols that Belgian yeast strains create, especially when they result in a peppery, whipcrack-dry saison. My favorite recent beer we brewed was a tripel crossed with an American IPA. Pilsner malt, Columbus and Simcoe hops with a touch of Saaz, lots of candi syrup, hungry yeast: we'll brew this one often.

Lara: That breakfast stout is very tasty, I grant you this. That IPA/Tripel was heavenly, though. I want to make that again soon!

How many batches have you made this year?
Paul: Seventeen between January 1 and December 1, with plans to brew two or three more before the year's end. We brew on Sunday mornings, typically twice a month.

Give us some examples and the names you picked out for them if you gave them a name.
Paul: The best beers we've brewed this year have been that tripel/IPA hybrid, a smoked rye season, a dank amber IPA (Vienna malt vs. Columbus, Galaxy and Chinook hops), and an ordinary bitter.

Lara: We've been using song & book titles and movie references for names. We're pop culture nerds. Our last Marzen was called Hallogallo after a Neu! song, and the tripel/IPA hybrid was named The Secret History after one of my favorite novels. That dank IPA got dubbed Space Oddity. Maybe we should call our homebrewery Copyright Infringement? 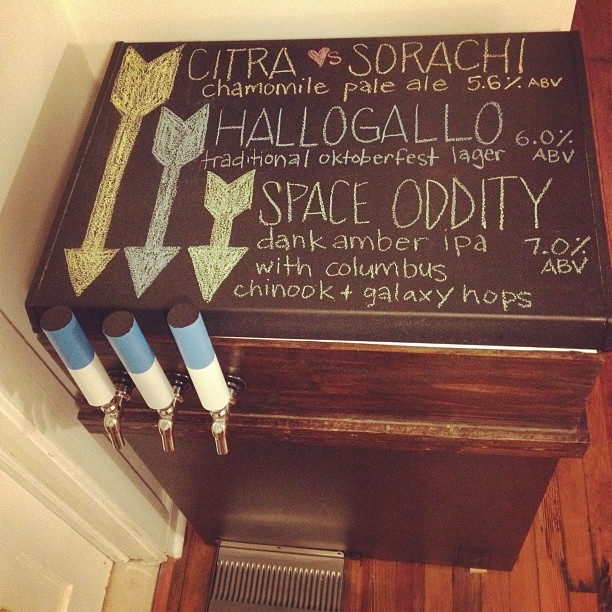 Any bad batches? Were you smited by the homebrewing gods?
Lara: Oh man, yes. We've had three that we should have tossed. The one that made me the most mad was tainted by an aging keg--the (scrubbed and sanitized!) O-ring on the lid was basically permeated with a smell like moldy root beer. Guess what that batch tasted like? Stupid O-ring.

Paul: See also the lighter fluid tripel. We've definitely made some of the classic rookie mistakes like heavy-handed spicing and oversparging, but those mistakes are getting rarer and rarer the more batches we get under our belts. Not that we're invincible superstars by any stretch of the imagination.

Lara: We can also be clumsy with our equipment on occasion--both of us. Our blog has lots of examples of this.

Brewing plans for the future?
Lara: I want to make a Gose! Soon! There is a recipe in one of Charlie Papazian's books. I bet Paul will tweak it a bit, though.

Paul: True. I can't help myself. I'm eager to play with brettanomyces and lambic strains, too, which we haven't done at all to this point. We just brewed an underwhelming saison that's a prime candidate for some experimentation. It's about to get dosed with fruit and brett and sit quietly in the shower for a few months. Ask us this time next year how that one turned out.

Lara: Don't forget the oak chips we got for it. That beer is going to be either great or have way too much going on.

Plans on entering any competitions this year?
Paul: Definitely. We'll be entering the NC Brewer's Cup again in 2013 and possibly the Piedmont Brewer's Cup. We participate in two local homebrew charity events---BrewDurham and Homebrew for Hunger---and each has a competition element.

Any awards from past competitions?
Lara: Our Ordinary Bitter got third place in the NC Brewer's Cup this year, in the English Pale Ale category. That was nice.

Paul: Our Belgian strong golden ale got an honorable mention, as well.

Any advice you'd like to give other homebrewers?
Lara: Clean and sanitize everything like a crazy obsessive person. Brew something you can't easily find or buy. Talk to other homebrewers who make beer you like!

Paul: What she said. And read lots of books. It's good to understand some of the science and history behind all those hours of your life spent watching wort boil in a kettle. Also, mind your yeast. Don't think your work is done just because you've pitched the yeast and tucked the fermenter away. Our beer took a significant step up when we started focusing on pitching rates and fermentation temperatures.

If you were omnipotent, what would you do to right the beer universe?
Lara: Scaling up to a multi-barrel system can seem as farfetched as building a rocket to the moon. I'd make brewery startup costs a little less insane, and hope the market wouldn't then be flooded with bad beer.

Paul: The beer universe is pretty great overall, not that I don't have notes. I'd love to see a lot more cask ale here in the US, especially sessionable styles. I'd also like to see more casks that aren't stuffed with fruit, pipe tobacco or Swedish Fish. Playing with cask additions is great. We just need more of the pure experience and a little less of the pantry clearing.

Lara: I'd like to see and hear even more from women who are excited about beer, too. Clubs like NC Girls Pint out are a great way to build a community of lady beer lovers & have lots of fun in the process. Because beer.

Favorite domestic beer?
Lara: This changes all the time. Locally, Foothills Jade IPA is pretty much pure magic in a pint. Mystery Brewing's Papa Bois Foreign Extra Stout makes me take back every negative thing I've ever said about stouts.

Paul: That's about as easy as naming my favorite record. Rather thank pick one of the obvious list-toppers, I'll highlight a couple gems here in North Carolina that you should seek out: Captain James Jack Pilsner from the Olde Mecklenberg Brewery and Vortex II, a Russian imperial stout from Pisgah Brewing.

Lara: I am obsessed with that Old Meck Pilsner, yes.

Favorite imported beer?
Lara: Timothy Taylor's The Landlord for session drinking, or Houblon Chouffe if I can get someone to share the bottle with me.

Favorite beer and food pairing?
Lara: A good Saison with anything at all. Hefeweizen and spicy sushi.

Paul: A brash IPA with curry.

In the kitchen I make a mean... (beer related).
Paul: Brisket. One of my best dishes, made only once a year for our annual Oktoberfest party, is a braised brisket simmered in Stone Smoked Porter, broth and an army of aromatic vegetables.

Lara: I think my Oktoberfest Strudel is pretty solid! We go all out every Oktoberfest, it's my favorite day of the year. The brisket is the star of that party though, our friends talk about it all year. 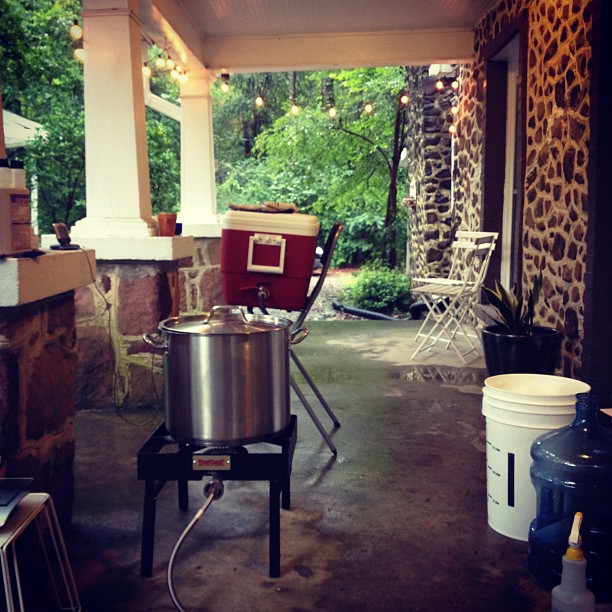 Find Lara and Paul online at:
www.citralovessorachi.com
@citrasorachi on Twitter