Interview with a Homebrewer - Bar-B-Que Brewer

The next homebrewer up in our interview series wears many hats.  Besides homebrewing, he's an engineer and also a small businessman.  When he's not doing incredibly complex things at his day job (we suppose), you could probably find him homebrewing or at least thinking about homebrewing.  On top of that, he helps to run a his own small BBQ sauce business (see the bottom of the article).  Welcome to the Comfy Computer Chair of Fame, homebrewer/bar-b-q'er Mr. Bill Fishburn. 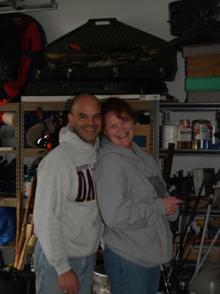 When did you start homebrewing?
I started brewing in 1990, just before I reached legal drinking age.

What got you into homebrewing? A person? An unfulfilled interest? Sheer boredom?
A roommate and I liked beer, but we were underage. We saw an ad in Rolling Stone magazine for a homebrew kit, and figured we had a solution to our dilemma. Unfortunately, with our joint class schedule, we never got around to brewing until I was a few months shy of 21.

Do you belong to a homebrew club? What is it?
Yes, South Sound Suds Society in Olympia, Washington.

Where do you brew? Inside/outside?
Inside the garage with the door up in bad weather. Outside in the driveway in good weather.

Where do you ferment? Have you had to do anything creative to facilitate this?
I have an old upright freezer that stopped freezing things. I built a cooling/heating controller using a two-stage temperature controller and an electrical outlet in a Radio Shack project box. I found the original plans in the forums on HomebrewTalk.com.

Do you have a pet name for your homebrewing enterprise? If so, can you give us a little background?
We call it, "Fishburn's Six Penny Brewery". When I built my first keggle, I used JB Weld to stick six pennies to the cut-out so I could use it as a lid and keep it from falling in. The funny thing is the JB Weld has pretty much all failed, and none of the pennies remain, so we should probably reconsider the name.

How large are your batches?
With the addition of a keggle, a keg-turned-hot liquor tank, and a higher capacity mash-tun, I have graduated to 10-gallon batches. 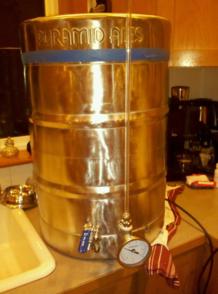 What kind of equipment do you have?
I'm an all-grain brewer. I have two kegs I converted for use as a boil kettle and a hot liquor tank. I use a Coleman ice chest with a copper manifold for my mash tun. I have two turkey fryer burners I use to fire the BK and HLT.

Are you fine with that or do you expect to upgrade to bigger and better?
As a tinkerer with a touch of OCD tendencies, I doubt I'll ever be satisfied. My vision of brewvana is the Brutus 10, and I'm currently accumulating the hardware and skills to build my own. I'd love to be a one-barrel brewer at some point.

What are your favorite styles to brew?
Stouts and IPAs. Hands-down. No questions. Coincidentally, they were the first two styles of craftbeer I ever tried.

All grain/Extract or both?
All grain

How many batches have you made this year (2012)?
I don't have my brew log with me, but I think I just finished batches five and six with two more happening this weekend.

Do you keg, or are you still bottling?
Keg. My kegerator has room for five kegs, but I have only two tap handles so far.

Give us some examples and the names you picked out for them if you gave them a name.
Our stout is made with oatmeal and toasted teff. We call it Eatcher Breakfast Stout, but we changed to that after we saw several others named, "Breakfast in a Bottle". I named our DIPA, "Hoptopus" for its eight different hops added at eight different times. I recently made an APA from the second runnings of Hoptopus. I named it "Hoptopus's Backwash". I called my Oktoberfest, "Bundeskanzler Oktoberfest". I think it means Prime Minister Oktoberfest, but I don't remember why I named it that. Those memory braincells were apparently casualties of that beer.

Any bad batches? Were you smited by the homebrewing gods?
Yeah, two that stand out. My first batch ever was a nut brown with the ingredients that came with the kit. It used a dry yeast that took a long time to start. I made it in a plastic bucket. I knew nothing about sanitation. Every bottle from the batch was a "self pourer"--a term I prefer to "gusher"--and tasted terrible. There was no way I was pouring it out, so I choked down two cases and proudly punished any friend that would drink it with bottles to take home.

The second was a Chocolate Cherry Stout from Papazian's Joy of Homebrewing I made about four years ago. I don't know if it was the cherry puree or piece of my equipment that didn't get cleaned, but the beer tasted like rusty nails (let's ignore for the moment that I know what rusty nails taste like). It was the first time I seriously considered dumping a beer. I didn't, but I sure thought about it. No one else would drink it, and the only saving grace was I made it in my five-gallon system before converting to my current set-up.

Brewing plans for next year?
As with most homebrewers, I dream of having my own commercial microbrewery. Nothing big, just something that brews and serves locally in a 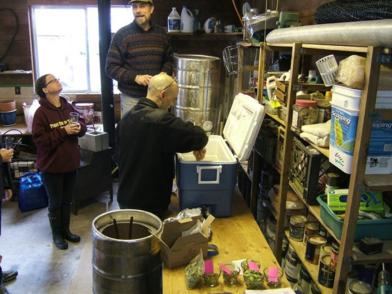 two- or three-county area. To that end, I'll start designing an on-site (at my home) brewery this fall. We're hoping to break ground early next year.

Plans on entering any competitions?
Always. There are several in our area that I've been entering for only the past three years.

Any awards from past competitions?
We took fourth at a local pro-am with our stout. That qualified us to be considered by a local pro brewer, but we weren't chosen. The same stout took first place in our homebrew club competition last year.

Any advice you'd like to give other homebrewers?
Brew early, brew often. Always store your gear with the valves in the closed position. Prep as much as you can the night before brew day. To keep it fun, make brewing a social event. Involve your spouse (that's the "we" I keep referring to, by the way... my wife started brewing with me about two years ago in a "can't beat 'em, join'em" kind of way).

Last, try to get some judging experience. I became a BJCP judge in October 2010, and it has really helped my brewing.

When I'm not homebrewing in the kitchen, I make/cook a mean....?
Loaf of bread. Neapolitan style pizza. BBQ (pulled pork and ribs).

What does you significant other think of your hobby?
My wife began brewing with me in 2010. She loves the product and the process. It works great that way.

Some parting thoughts?
I love to brew. I've hosted some incredible brew parties. I've met some incredibly generous, passionate, gracious people. It allows me to exercise my creative and my analytical (read, "OCD engineering") skills. I see no end to the potential learning brewing can provide.

Finally, I'd love to stick around and ask some more question, but I seem to have a boil over emergency. Please ask and answer a final question. Not on the burner, not on the burner...

If you could sit down with anyone (living or dead), who would it be, what beer would you offer them and what would be the first question you asked?

I'd like to sit down with that ancient, prehistoric individual who first discovered the mysterious bubbly liquid in their urn and ask them what happened for real and what made them decide to try drinking it. I'd offer them a glass of my IIPA and try to understand how it compares to the original. 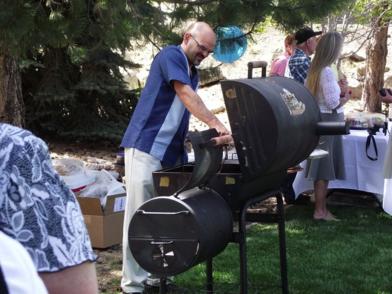 I addition to homebrewing, you also make a sell some bar-b-que products.  Can you tell us a little about it?

For years, my dad has made a BBQ sauce that he perfected after an annual Marine Corps Reserve summer camp obligation in Oklahoma, where he learned to love the style of cooking. In 2007, my wife and I decided we would start making and selling the sauce locally.  We sell in one local grocery whose focus is locavorism (OlympiaLocalFoods.com) and at local community markets and holiday bazaars. We also sell via our website, www.GrampaBillsBBQ.com. My dad's name is Bill, too, and he's always been Grampa Bill to our boys. Not only do we sell a BBQ sauce, but we also sell BBQ rubs from a recipe I make, and a teriyaki sauce that my mom made for us growing up.