Interview with a Homebrewer - 3 Frenchs

Another great homebrewer was willing to sit down in the Comfy Computer Chair of Fame for an lively interview.  This interviewee got into homebrewing the way I think most do, with a buddy.  That has progressed to averaging many batches per year.  I'll let him tell you all about it.  Welcome our interview series, Mr. Robert French. 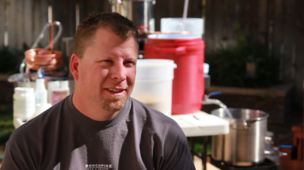 When did you start homebrewing?
More or less about 16-years ago I brewed my first batch of beer.

What got you into homebrewing? A person? An unfulfilled interest? Sheer boredom?
One of my best friends, Paul, got a homebrew kit as a gift and we used that for the basic homebrew set-up. We also rummaged through the kitchen to find, use, borrow and claim any kitchen accessories that we thought could help us along the way. At that time, our beer choices were slim and we were on a beer adventure. Our goal was to be brew bigger and bolder beers that that average beer drinking would not want.

Do you belong to a homebrew club? What is it?
Not really, I did join www.brewcommune.com but I have yet to participate. I do like the idea of being part of a club, my motivation is a bit lacking. Most of my brewing is done solo.

Where do you brew? Inside/outside?
For the last few years I have brewed in the backyard. My wife was very happy to get me out of the kitchen.

Where do you ferment? Have you had to do anything creative to facilitate this?
Primarily I do all my fermentation in a converted freezer located in the garage. I also have an insulated cabinet in the garage that I store my sours for long term.

Do you have a pet name for your homebrewing enterprise? If so, can you give us a little background?
Threefrenchs Brewing is what I use on www.untappd.com to log in my homebrews. The name really has nothing to do with brewing or beer. Three-Frenchs really just is my family. Myself, wife and daughter and we make up the 3 Frenchs.

How large are your batches?
5 gallon batches. I’m working on a brew stand that will allow me to up the batch size up to 10/12 gallons. I hope this system will be functional by the end of summer.

What kind of equipment do you have?
I have an 8 gallon brew kettle from MoreBeer and I use 2 10-gallon Rubbermaid coolers, one for the mash and the other for the HLT. For fermentation I use both glass and plastic 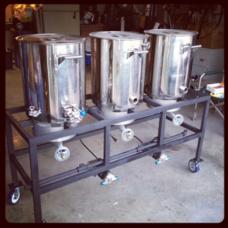 carboys along with a few pails that I keep for when I do big beers and beers for fruit additions.

Are you fine with that or do you expect to upgrade to bigger and better?
5 gallon is really a good size, but I’m looking forward to moving up to 10+ gallons so I can split batches and use different yeasts, different dry hopping and other additions.

What are your favorite styles to brew?
As far as the actual brewing (brew day), the style really doesn’t matter, nor do I have a particular favorite. If I had to pick one style I really enjoy working with it would be the Saisons. I love the style for what it is, but I also enjoy that fact they lends well to all kinds of additions. Fruit, funk and Oak either singular or in combination can really make for some fun brews.

How many batches have you made this year?
This year has been my slowest year out of the last 3. To date I have only brewed 6 batches. Last year I brewed around 20 and the year before that I was at about 12. A few reasons for the slow year have been storage and time. I had so much beer in bottles from the previous year that I had to slow down a bit and this year has just been busier. To help in the bottle storage issue I decided to brew a few long term beers. So I currently have a Berliner Weise, Flanders, and Barley Wine aging.

Give us some examples and the names you picked out for them if you gave them a name.
I do like to have fun with the names. Tipsy Melons – Watermelon Wheat, Shake You Tree – Farmhouse Peach Saison, and Brown Eyed Squirrel – Nut Brown Ale are a few of my favorites. Many times I will come up with a name and then try to figure out a beer that goes with it. I little backwards, but it adds to the fun.

Any bad batches? Were you smited by the homebrewing gods?
The only batch that never made it was over 2 years ago. I can’t even remember the style, but if just never fermented and had a “troubling” aroma. I dumped it at about week 3 and could never figure out what caused it.

Brewing plans for the future?
More! I don’t think I will ever stop experimenting with new ingredients; I do want to finalize my house recipes for my IPA, DIPA and American Wheat.

Plans on entering any competitions this year?
The only competition I’m currently working on is the www.ironbrewer.com I’m sure I will enter one or two more this year, but I have not made any commitments. 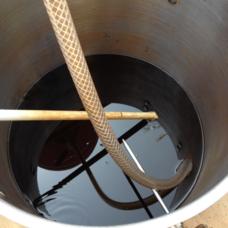 Any awards from past competitions?
Even though I have brewed for a long time, my first contest was a few years ago, the Batch 300/The Bruery competition. I did not win, but I did get scores of 40/41 on my entry. It was very interesting to read what total strangers thought of your beer. It’s great to get feedback from friends, but come on they are your friends. Since then I have won two 3rd place awards and one 2nd place award at the Orange County Fair. My big win was the Newport Beach Brewing Company’s homebrew contest. I got to brew my winning beer on their 15-barrel system that was very cool!

Any advice you'd like to give other homebrewers?
Don’t let a bad result deter you from the hobby. Learn from your mistakes by reaching out. Twitter is a great resource in real time. Organize homebrew bottleshares, this is a great way to find out what others are doing and ultimately improve your brewing methods and your final product.

Any closing thoughts?
It’s your hobby; brew what YOU like to drink, regardless of style.

If you could sit down with 1 person (living or dead) and ask them questions. What brew would you offer them and what would be the first questions you would ask?
You said 1 person, but since I’m writing this I’m picking 2. #1 Fritz Maytag of Anchor Brewing. He is truly a legend on the craft beer scene. I have the feeling he is not much for some of the radical beer styles so I think I would stick with a classic Porter it just so happens Anchor brews a fantastic one. I think the first question would be “what was your business goal when buying the Anchor Brewery?” #2 Tony Magee of Lagunitas. The more interviews I read and hear with Tony the more he fascinates me. An interesting man, with a great story and an awesome brewery. I think I would bring my homebrew Farmhouse Saison, since while sitting at the brewery it inspired me to brew my own. As for the first question, “with the massive growth in microbreweries, will there always be more for more breweries?”

If you were King, what would you do to right the beer universe?
I prefer Overlord; I’m not much for Royalty. I would make sure very community had a local brewery. The world would be better place if arguments, disagreements and decisions were made over a pint a well-crafted locally produced beer. 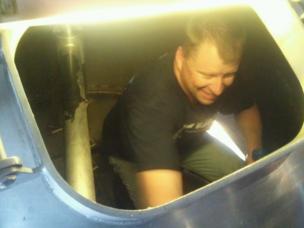 My go-to beer is Racer 5 from Bear Republic.

Married? Children?
Yes, with one Daughter