We've done quite a few interviews with head brewers in the past here, but none quite measure up to our latest. They were all good, but for sheer quirkyness our latest is a cut above. The Comfy Computer Chair of Fame had a hard time holding this brewer down. Fantastic interview nonetheless. Hold onto your hats and get to know our latest interviewee, The Celt Experience head brewer, Mr. Tom Newman. Remind us never to ask any more about "dogwhelks" (you'll understand). 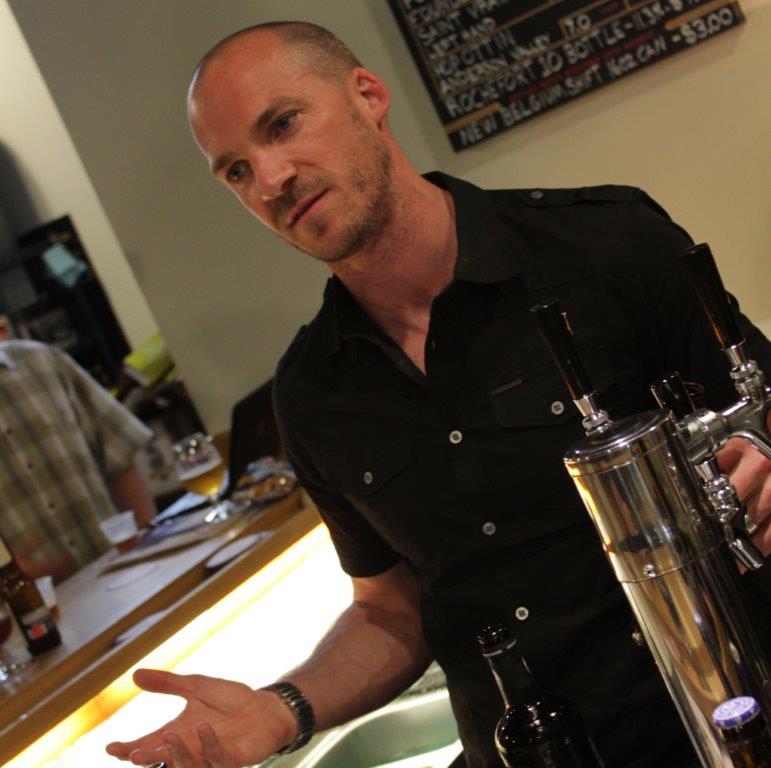 Any type of formal training in brewing science or art? If not, how did you learn the craft?
No brewing masters, but I've trained in Belgium on Belgian brewing techniques at VLB Berlin in brewing microbiology, and studied microbiology in my science and engineering degrees. I have also been through a Brewlab programme and a Beer Academy 'sommelier' programme. I studied Environmental Pollution Science as my first degree, which included a study on 'the impact of marine pollution on dog whelks', which does not sound that interesting, but actually it is...There is a disorder called 'imposex' which actually causes female dogwhelks to grow a penis through an inducer called TBT. My colleague and close friend Steffane had the painful task of measuring female penis sizes for 6 months...

If you will, a brief history of your brewing experience (where have you brewed)? When did you move to this location, or have you always been there?
I started home brewing beer and wine in 1989 (at 14 years old) but worked first in the brew industry way back in 1991 at Butcombe brewery in Somerset. At the time they were seen as pioneers as they split from the norm. I had time for that. My job was cleaning out vessels, racking Butcome bitter and cask cleaning. I even cut the late Simon Whitmore's lawn on a few occasions! I became chartered in Water engineering in the mid nineties and worked on process at various cider factories and breweries including bulmers and Guinness in Park Royal. In 2003 I opened my own brewery in Banwell, Somerset with the help of George Thompson (former Mansfield head brewer). This was under the name of Newmans brewery (intentionally) and is where I learnt how to bugger things up, fix things, learn about how bad cheap hops are and generally spend life stressed. The brew plant was 4.5 BBLS. I lost most of my hair during this period... I moved to Yatton in 2005/6 converting an old railway building and designed a 20 BBL brewery. We only stayed there for a few years, but I really started getting to grasp off late hopping and US hops at this stage. In 2007 I move back to my fathers homeland of Caerphilly and decided I was at a level ready to release a cool brand stepping out of 'the old scene', which was when 'The Celt Experience' was launched. I designed and installed a 40 bbl plant with an automated bottling line. Initially we found some organic cascade, first gold and Nz hops which made me believe aromas suited using organic... But we took a U-turn on this in 2009 as it was restricting recipes. In 2009/10 we really started throwing in silly quantities of hops and using different yeasts, which was probably when out name started to really get some recognition outside of Wales. I feel like I am rambling, so I need to move on before I bore myself

How large is the brewery (# of barrels annually)?
40 bbls brewlength 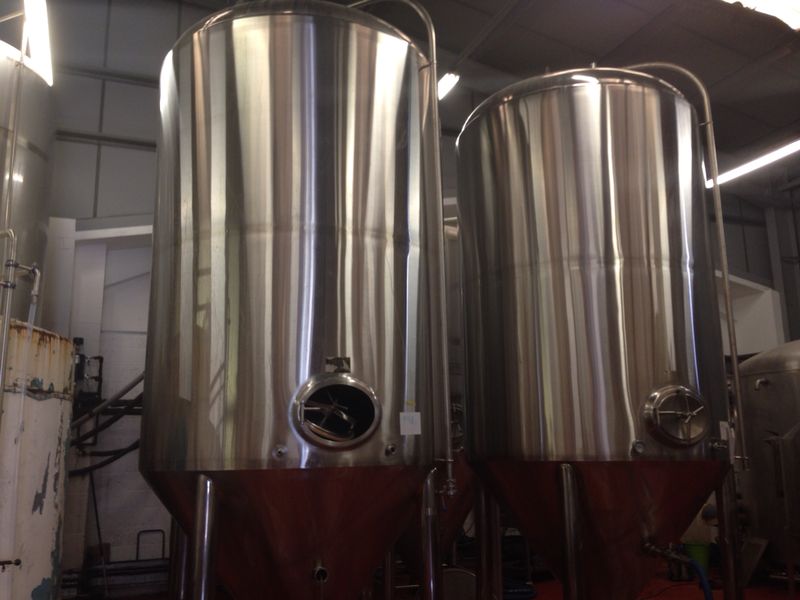 Is it automated or is there a lot of exercise involved in your brewery's operation?
We are pretty manual. All the hard workers are pretty damn fit, the lazy ones eat too many cakes and pies and the sales guys have red noses from the high alcohol and ' hop sneezing...

Have you ever had a bad batch? If so, how long did it take you to figure out what caused it?
In Newmans (2003-2006) I regard the good batches as bad batches, but I was learning !! With respect to infections, yes I seen 1 or 2 in each brewery, but I have never brewed one of those brews (just took it for the team!!). The cure is quick, drink all the beer, then blitz the brewery, calling every piece of plant the worst name you can think of and kicking it a few times en route... These days you can make beers spontaneously so infections can be quite pleasant (if balanced)...

Is there more pressure put upon you as head brewer in a smallish brewery to try and match other small breweries in offerings?
No, We have a small plant but we brew experimental beers on either plant. The small plant is more for 'Cell Rebirth' a project I have been running for 2 years culturing wild yeasts from the Wild Welsh atmosphere and re-brewing, ageing in bulk tanks and barrels. But we brew sours and imperials on our 40 bbl plant, so happy on either.

Can you give a hint if anything might be coming from your brewery (new brew, special brew, etc.)?
We have a kaffir lime/ mosaic Porter dry hop x-mas beer coming soon called Horse Cranium. Also a lemon infused wheat/ rye low abv beer for January called Castro Mosaic. Yep we've got some MOSAIC wooooooo!!!

Please describe the weirdest ingredient you have ever put in beer.
Mugwort, hemp stuff, wild welsh bugs and foraged pine etc etc. BUT the most unusual goes back to my days in Newmans. We found a bat in out conditioning tank. I guess this could be termed as dry-batting? 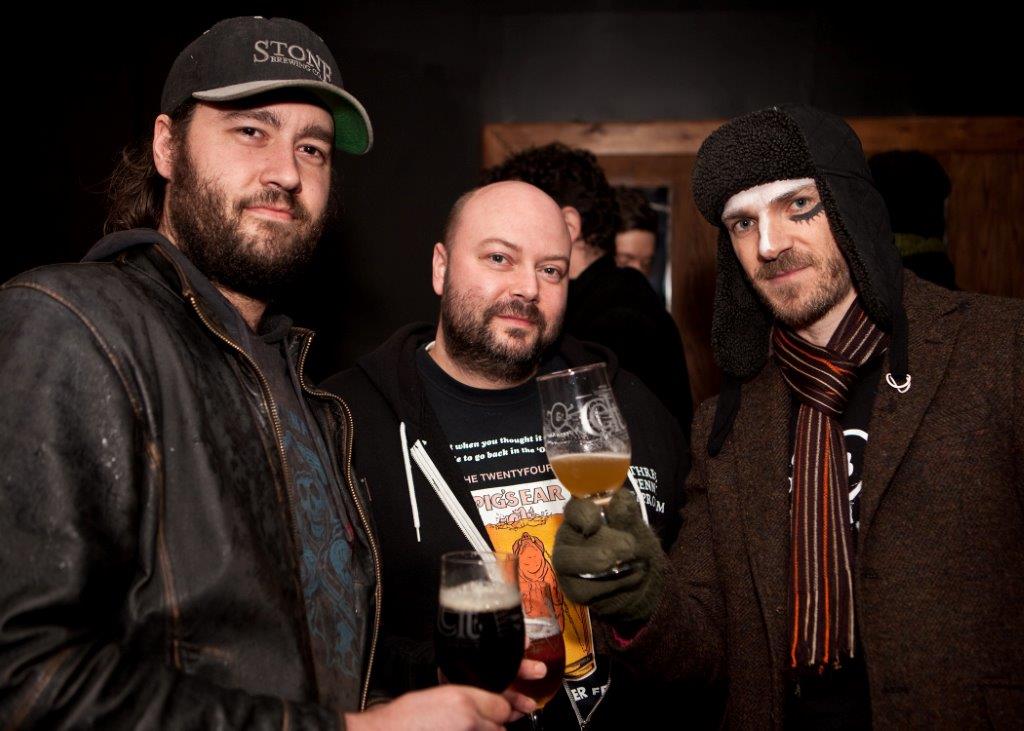 Loads of Camra and SIBA awards each year, but cant remember all sorry. We also won International beer awards in Japan for our Ogham series including best Belgium tripel which was funny.

Most every workplace has some type of tradition. Does your brewery have some type of tradition on brew day or at another time? For example, using a special tool that has been around for a very long time, play specific music while brewing, etc.
We have a large hop percolator called 'The hop druid' named after the magic that it adds to recipes. It takes upto 40kg of whole cone hops and adds an aromatic layer that supplements dry hops giving beers great depth. We worship the druid.....

Have you traveled outside of England/Wales to experience another beer culture, in say, Belgium or Germany or the USA? If so, what was your impression.
We export to a lot of countries so have travelled to run events at many. We have made collaborations in China (Boxing Cat), France (Brasserie st germain), USA (Ale syndicate) and many more.

If you had to pick a favorite beer from the brewery and offer it to a stranger, which one would it be and why?
Hallstatt Deity.. It is a pomegranate farmhouse beer aged for 11 months. The beer just keeps getting better and better. But most public seem to see Brigid fire, which is a smoked rye IPA brewed with biere de garde yeast culture and hopped with Nelson and citra. Also the imperial ogham series go down well. 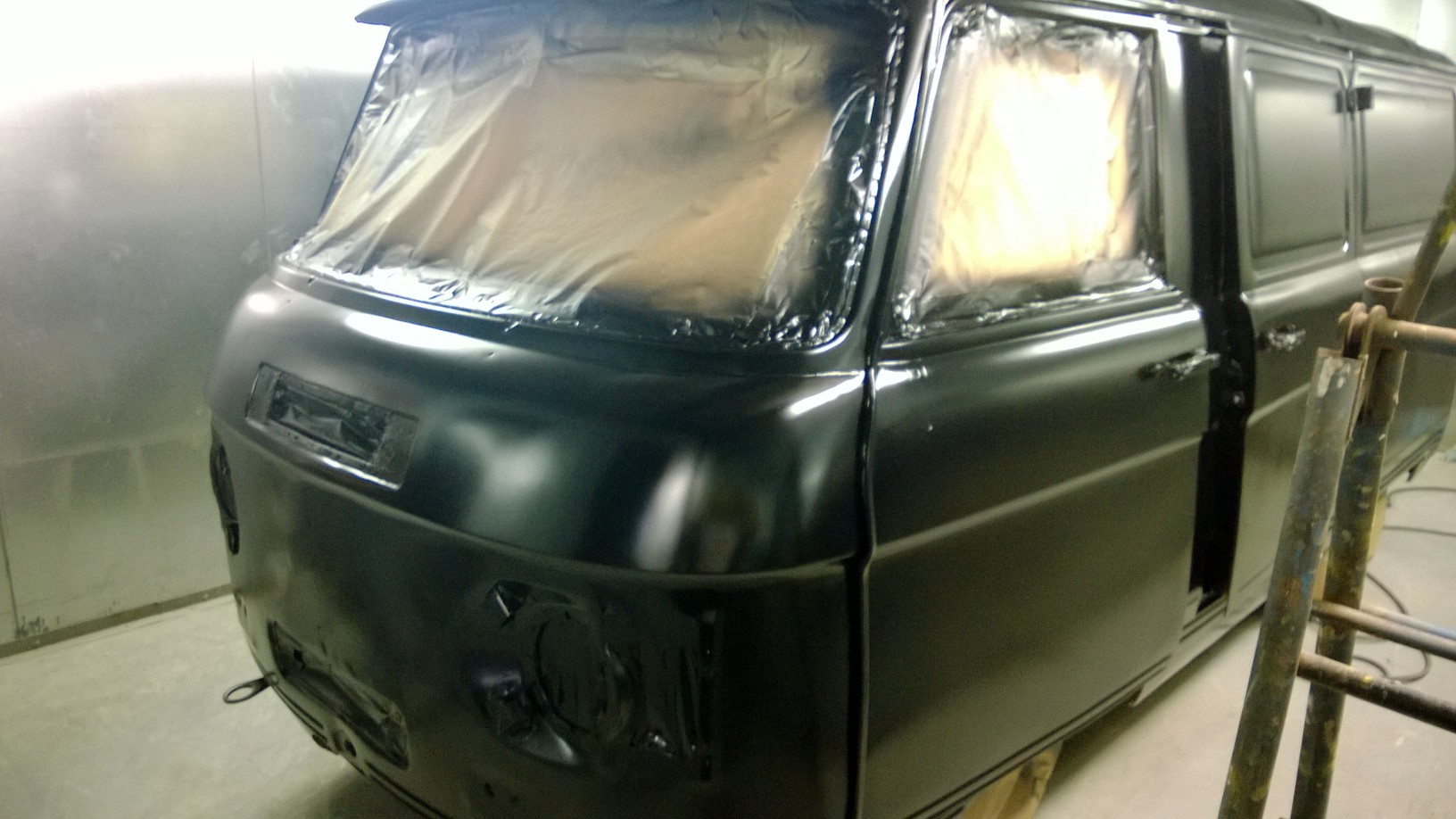 If you could sit down with anyone (living or dead) and have a beer, who would it be and why? What would be the first question you would ask them?
Owain Glydwr. I'd get him whacked on imperial porter/ stout and then ask him what he was thinking when he thought he could take on the British Empire in a war. Then I would ask him how the beer compares to the braggot he is used to forcing down his throat...

If you were omnipotent, what would you change (first) to improve our beer universe?
I would turn US hop farmers into lemmings and make them grow enough hops efficiently to supply the best brewers hops at the right price (under £10/ kg please Charlie faram!!). Oh, if the lemmings could be women this would be better as I feel they could pick the fresh cones with more delicate hands...

Any advice for those aspiring (kitchen/homebrew) future pro brewers out there?
Do not restrict ingredients. It doesn’t cost a ot on small scale so experiment and taste. These are the good guys

Favorite beer and food pairing?
Still Perl Las (Welsh farmhouse blue cheese) and our Ogham Ash Imperial Porter. The sharp acidic cheese works so well with the deep winey alcohol character in this beer. We design all of our beers on food before making the recipes. Our Bleddyn was made to tie with a bloody gem of a Caerphilly cheese from Caws Cenarth. The slight citric tang in the soft cheese it ripped through with the chinook dry hop in the beer... sorry I could go on and on

In the kitchen I make a mean? (beer related)
Medallions of sirloin served on a buckwheat pancake with rochefort sauce... Great with IPA or imperial stouts. I love cooking

What do you like to do in your time away from the brewery?
I love mead, rum and gin and have plans to commercially make all of them (on a BIG flavour style). I love most music genres and have a musical family (I play guitar, brothers are both musicians). I speak Welsh and love surfing, skiing, snowboarding, rugby, Tennis and actually most sports.

Are you married? Any children?
Yep with 4 children aged between 2 and 10... I know, and they are bloody mental!

Describe your perfect beer day (outside the brewery). For example, a day with family or friends at the brewery, a picnic with family or just a quiet day at home (sipping your brewery's beers).
Spending time with team at Celt and with our collaborating brewery friends around the world, eating, drinking and talking shit!!

Any final thoughts?
I love beer fate, romance and mythology. I still brew with parts of the Smiles Brewery plant that I purchased in 2006 on a whim (I went there with virtually no money to get a cheap mash tun, and ended up borrowing £10k and buying the whole brewery). I also believe in the myths that each of our Celt beers are named after. Every corner of Wales has a myth and it all they all have a meaning...

Finally... The bowling lanes and Fire festival: Yes I built a 10 pin bowling alley in our brewery instead of making more bottle storage. We are still having licensing issues, but this will be ready soon.... In time for the fire festival !! Look out for info on the fire festival... It is coming soon (february 2016). The last event was a sell out (we brewed fuzzy with our mates 'super furry animals' at the festival). 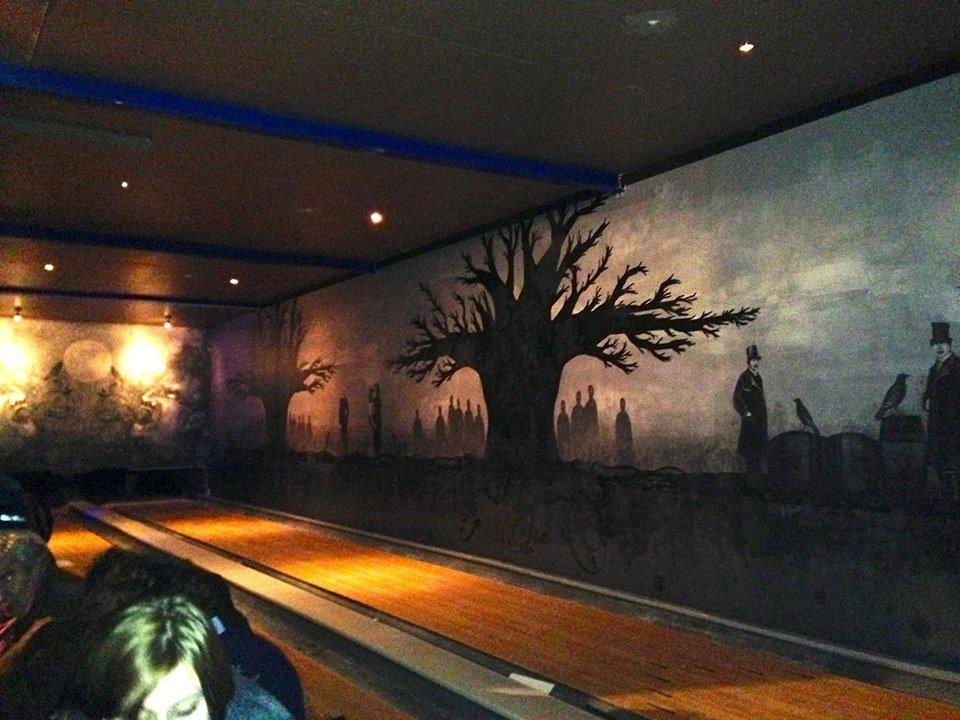