Interview with a Brewmaster - Summer Camp

Perhaps knowing the this was the brewer they were looking for, our sailor friend to the right was prescient enough to pick our next brewmaster out of a crowded field.  Starting with homebrewing in 1996, this brewer has taken the most common route to his position as Head Brewer at Port Townsend Brewing Company.  This means starting as a homebrewer and then working his way through various positions at this brewery or that, all the while soaking in all the brewing knowledge he could.  Please welcome to the Comfy Computer Chair of Fame, Mr. Carter Camp. 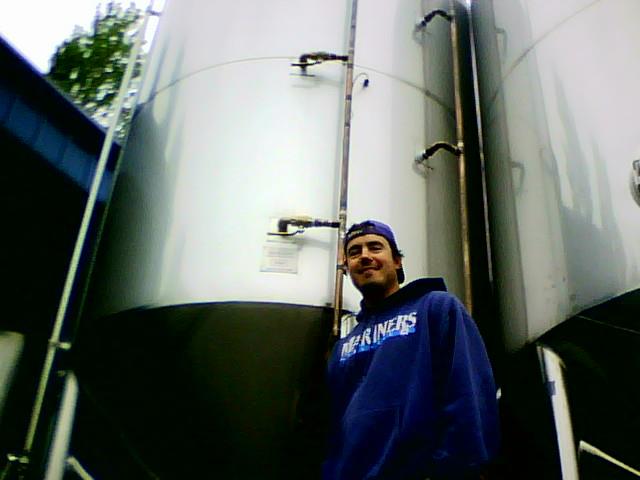 How long have you beer brewmaster there?
4.5 years

Any type of formal training in brewing science or art? If not, how did you learn the craft?
I started out homebrewing in college around 1996. I got my first brewing job as an assistant for Kevin Forhan at Big Time Brewing in Seattle. He shaped me into the brewer that I am today. I learned an incredible amount from him.

If you will, a brief history of your brewing experience (where have you brewed)?
My first job in the industry was a bottling position at Hale's Brewing in Fremont. I was only there for the summer of 2000 before I took the assistant brewing job at Big Time, under head brewer Kevin Forhan (currently at the Northgate RAM). In fact, I replaced Bill Jenkins (currently at Elliot Bay Brewing Lake City) who was hired by Hale's (though as head brewer, not bottler!). I was at Big Time from the fall of 2000 to the winter of 2004.

How large is the brewery (# of barrels annually)?
We currently stand at 2500 bbls a year on a 15bbl system, although a planned expansion is under way.

Is it automated or is there a lot of exercise involved in your brewery's operation?
It is a nice mix of both. I have a silo of my 2 row base malt for example. A thousand pounds at a push of a button is very nice! On the flip side, we still scoop out our mash tun and kettle by hand.

Have you ever had a bad batch? If so, how long did it take you to figure out what caused it?
I have a had a bad batch or two along the way! If anyone says they haven't they're lying! In my case it was yeast related, poor attenuation or an incomplete fermentation.

Is there more pressure put upon you as brewmaster in a small brewery to try and match other small breweries in offerings?
The only pressure I feel is this time of year when we start running out of beer! My situation is unique in that I have 9 year around styles to manage for both draft and bottle, 11 when you include our Winter Ale and Barleywine. For a 15 bbl brewhouse that is 75% wholesale, that is a lot of styles to keep up with! It is only in the slower winter months that I am able to brew specialty beers or one offs. Of course that is my favorite time of year! Hopefully the expansion will allow me to pursue brewing more specialty beers.

Can you give a hint if anything might be coming from your brewery (new brew, special brew, etc.)?
Keep an eye out for the Drunken Sailor, my bourbon barrel version of the Lost Sailor Imperial Brown (9.2%). Also, you may find a Mad Sailor lurking about this year, a sour barrel aged version of the Lost Sailor (10.4%). Other than the limited number of specialty kegs cellaring now, I will probably have to wait a while to brew another Imperial IPA.

Do you or your brewery attend the large beer gatherings (i.e. Great American Beer Festival, Zythos, etc.)?
We have only participated in the GABF since 2010 (the brewery started in 1997). Nationally, that is the only one. We attend all of the major Washington Brewers' Festivals.

Any awards, either for you or your brewery?
PT Brewing won a medal for the Boatyard Bitter at the NABAs in 2007, before my time. We have not medaled since. I'm working on that ! Kevin and I won 4 medals with Big Time Brewing at the GABF between 2002-2003. I won a medal at the 2004 National Homebrew Competition in Las Vegas.

Most every workplace has some type of tradition. Does your brewery have some type of tradition on brew day or at another time? For example, using a special tool that has been around for a very long time, play specific music while brewing, etc.
Well, we have all sorts of one of a kind special tools! The one that comes to mind is an old birch oar that we use to manually start a whirlpool in our kettle after the boil.

Have you traveled outside of the United States to experience another beer culture, in say, England or Germany? If so, what was your impression?I have spent a little time in England, Ireland and Belgium. I felt very much at home in those beer centric cultures! I was most awed by the beer culture in Belgium in the way that every bar and restaurant really presented beer more reverentially, sort of like how wine has been held in higher regard in the United States for a number of years. Instead of multi page wine lists, you are often presented with multi page beer lists with your meals in Belgium. The Belgians have been cooking with beer and pairing dishes with beer for as long as they have been brewing. Fortunately, we here in the US are catching on!

If you had to pick a favorite beer from the brewery and offer it to a stranger, which one would it be and why? I might choose our Boatyard Bitter because it is a very approachable style and therefore very sessionable. It is a fairly traditional English style Bitter which few breweries in the country are producing regularly. It offers both a nice malt and hop profile that I think would appeal to a broad spectrum of beer drinkers without being too challenging.

If you could sit down with anyone (living or dead) and have a beer, who would it be and why? What would be the first question you would ask them?
Always a tough question, but I would probably say Jerry Garcia and I would ask him to play me a song!

Are you married? Any children?
I am married with a 3 and a half year old daughter.

Do you have a favorite beer and food pairing?
Lambics and oysters!

In the kitchen I make a mean? (beer related)
My wife is a professionally trained chef, so I don't cook very often!

Any advice for those aspiring (kitchen/homebrew) future brewmasters out there?
Always keep a spray bottle of isopropyl alcohol! Instant sanitizer!

What do you like to do in your time away from the brewery?
Drink beer at home in the company of my wife and daughter, and maybe have a game on the tube .

Describe your perfect beer day (outside the brewery). For example, a day with family or friends at the Port Townsends beer garden, a picnic with family or just a quiet day at home (sipping on Port Townsend beers).
I love to drag my family to as many breweries as possible when we go on vacations. Any time I can incorporate a family trip with beer drinking, I am a happy camper!

Favorite football team?
Without a doubt, the Washington Huskies!

If you were in charge, what would you change (first) to improve our beer universe?
I might apply the principals of World Heritage Sites to our world's hop and barley farmlands in order to preserve in perpetuity the ongoing supply of these extremely important cultural ingredients.

Any final thoughts? Thank you for supporting the craft brewing industry!