Interview with a Brewmaster - Rockne & Roll

Agreeing to recline in the comfy computer chair of fame and let us in on the inner workings of his brewery is a homebrewer turned brewmaster (the dream) hailing from Royal Oak, Michigan.  In his short time at the brewery he has rolled up an impressive list of industry awards and continues to push the envelope (peanut butter, really!?) with ingredients.  Part mad scientist, part beer lover, let's hear it for Brewmaster Rockne Van Meter.

When did the brewery start?
April 2004

How long have you been brewmaster there?
Since October 2005

Any type of formal training in brewing science or art?  If not, how did you learn the craft?
No formal training. Started homebrewing in 2000 after getting tired of buying $20 6-packs.

If you will, a brief history of your brewing experience (where have you brewed)?
Started professionally brewing in 2002 at Big Buck in Auburn Hills, Michigan for approximately three years. Took a one year hiatus and then at Rochester Mills from 2004 until 2005 when I left there and started at Bastone Brewery in early October 2005.

How large is the brewery your currently brew for (# of barrels)?
In 2004, the brewery produced 450 barrels and has increased production to nearly 800 barrels a year in the past five years.

Is it automated or is there a lot of exercise involved in your brewery's operation?
The brewery itself is very hands on. Bagged malt is loaded into the mill by hand as we have no silo, being we're a small brewpub. The mash is stirred with a flat shovel and emptied after lautering with a five-gallon bucket. We use open fermenters so each fermenter has to be climbed into and scrubbed by hand with a caustic, then acid solution and then sprayed down with an Iodifore solution before 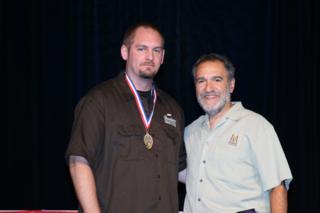 being covered with a plastic wrap.

Ever had a bad batch?  If so, how long did it take you to figure out what caused it?
Luckily I haven't had an infected batch. I've had a batch or two that I wasn't happy with the flavor, but that’s about it thankfully.

Do you get to name the brews or is it done by committee or dictatorship?
I am able to name and create all of the beers I make here without any external input. I'm pretty lucky in the fact that I'm able to brew whatever I feel like brewing. I'm given full-control of the brewery and it is something I need, and I don't take it for granted.

Please describe the weirdest thing you have ever put in beer (while brewing).
The weirdest thing I've put in a beer has to be peanut butter. I make a Peanut Butter Beer for local festivals that is a big draw.

Do you or your brewery attend the large beer gatherings (i.e. Great American Beer Festival, Zythos, etc.)?
I attend larger gatherings like the GABF but we do not pour beer at these larger fests. Being that we don't distribute our beer, as we are a brewpub and under Michigan law we cannot, it doesn't make much sense to send our beer out to festivals half way across the country.

While at Bastone, I've been fortunate enough to be able to enter competitions such as the GABF, World Beer Cup and others such as the NABA and BTI, as well as local competitions and be successful. The latest award at the 2011 GABF, a Bronze for Pin-Up Blonde in the Belgian and French style category, is our 4th year in a row coming home with a medal. At the 2010 World Beer Cup we won Silver for our Saison Du Bastone. We've won multiple Gold, Silver, and Bronze at the others accounting for 110+ since 2005. 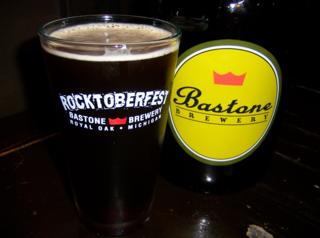 Can you give a hint if anything might be coming from your brewery (new brew, special brew, etc.)?
In the coming weeks we'll have a fresh batch of our Saison Du Bastone, a Pumkpin Ale, and also a fresh batch of Peanut Butter Beer and InfernAle, a chili pepper beer, will be served at an upcoming festival in Detroit.

Do you have a favorite beer and food pairing?
Beer and cheese. Any good beer, any good cheese.

In the kitchen I make a mean? (beer related)
Beef Bourguignon. I use a sour red that I make very infrequently just for cooking. And maybe a little drinking too.

Any advice for those aspiring (kitchen/homebrew) brewmasters out there? Expect a pay cut from whatever job you left no matter what you previously earned. You're not going to get paid millions even if your friends tell you that your beer is the best they ever had. Jump in with both feet. Write everything down. Don’t be afraid to throw away beer. Someone is always going to be way better than you. Don’t expect success the first time, or even the third or fourth. Cleanliness is paramount.