A part of the "Featured Brewery" activities this month on CellarMonk, we are lucky enough to interview the head brewer for the DuClaw Brewing Company.  Since we are covering almost every aspect of DuClaw, it was time for their head brewer, Jim Wagner, to sit down in the comfy computer chair of fame and answer some of the most important questions ever asked of a brewer.  Not really, but they are good questions.  So sit back, grab a HellRazer IPA (available locally in Maryland, sorry) and read on. 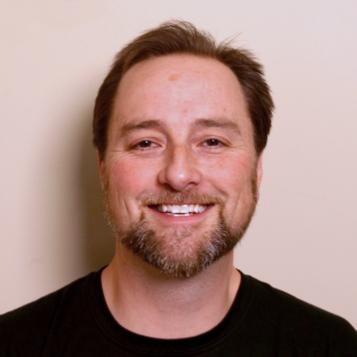 How long have you been brewmaster there?
1998

Any type of formal training in brewing science or art?  If not, how did you learn the craft?
No…home brewing since 1991

If you will, a brief history of your brewing experience (where have you brewed)?
Started pro with DuClaw in 1998

How large is the brewery you currently brew for (# of barrels)?
It is a 40bbl brewhouse with 5-40bbl and 5-80 bbl fermenters

Is it automated or is there a lot of exercise involved in your brewery’s operation?
Very little automation….other than the mash rakes; everything is handled by the brewer

Ever had a bad batch?  If so, how long did it take you to figure out what caused it?
No bad batches, but we have had keg issues where individual kegs were not up to standards. This was eventually traced to a poorly cleaned or should I say maintained keg. Sometimes we don’t get empty kegs back for a long time.

Do you get to name the brews or is it done by committee or dictatorship?
I’ve had input on some of the names. Devil’s Milk is a brew I came up with back in my home brewing days.  Our creative owner usually dreams up most of our names.  He’s also a comics geek, as you can likely tell from many of our beer names like Venom, Colossus, etc.

What are your favorite styles?  Do you get to work on them at your current brewery?
My favorite style(s) depends on many factors…..time of year and mood just to name a few. Because we do so many different styles, working on favorites is never an issue.

Please describe the weirdest thing you have ever put in beer (while brewing)?
Fireballs…..you know, the candy. We did that in a test batch a while back. The flavor was not what we were expecting so a Fireball brew is not on the docket.

Do you or your brewery attend the large beer gatherings (i.e. Great American Beer Festival, Zythos, etc.)?
Although we do attend local gatherings, it is almost impossible for us to attend the GABF or the like. With demand as it stands, we do not have the luxury of being away from the brewery for days

Any awards, either for you or your brewery?
We have numerous Maryland Governor’s Cup awards, but as far as national one, we really haven’t many. We hope to do more in the future.

Can you give a hint if anything might be coming from your brewery (new brew, special brew, etc.)?
We currently have a brew in the tanks that we have not brewed since 2005. It should come in at about 14-15% and will be released in a few months!

Do you have a favorite beer and food pairing?
Not really because so many beers go with so many foods. I will say that I’ll take beer with my food before any other alcoholic beverage. I like wine and love Bourbon, but find them more enjoyable on their own…..beer just marries with food in a special way.

In the kitchen I make a mean? (beer related)
Marinated Devil’s Milk pot roast and love to bake a loaf of spent grain bread to go along with it.

Any advice for those aspiring (kitchen/homebrew) brewmasters out there?
Learn and absorb as much as you can about brewing and be willing to work your way up if you are serious about making it a career. 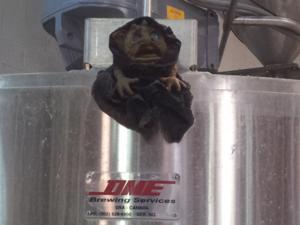 Every workplace has some type of tradition.  Does your brewery have some type of tradition on brew day or at another time? For example, using a special tool that has been around for a very long time, play specific music while brewing, etc.
We don’t really have a tradition per say, but what we do have is “The Guardian of the Tun” (see pic). He protects the brewhouse and wards off evil spirits, creatures of the night, DMS, wild yeast spores….the list goes on and on.

If you could sit down with anyone (living or dead) and have a beer, who would it be and why?
Vince Offer…..because I have so many questions

What would be the first question you asked them?
“Why have you been gone from my TV screen for so long?”

If you were in charge, what would you change (first) to improve our beer universe?
Get all the American Premium Lager drinkers and the high gravity beer snobs to think outside the box every once in a while.  Every beer you drink does not have to be an adjunct dominated lager nor does it have to be a double digit abv palate bomb. Why pigeon hole yourself when there are so many great styles out there?