Interview with a Brewmaster - A Grand Floridian

Let's bring to the stage our next brewer.  Talk about the life of Reilly.  A job he loves, in a nice sunny location (if you don't mind an occaisionally pesky hurricane) and always with an eye towards the future.  Next up in our Interview with a Brewmaster series, welcome Michael N. Bryant of the Dunedin Brewery in Dunedin, Florida.

How long have you been the brewmaster there? Since 1996

Any type of formal training in brewing science or art?  If not, how did you learn the craft?

Mostly self taught. Have attended American Brewers Guild on the road weekend course in Orlando, FL. Some tasting courses at the GABF (Great American Beer Festival).

I did my first fermentation experiment in 1960 at 13 yrs old.  It was orange wine for my Mom, made with Louisville Kentucky water, red star yeast, Florida oranges and Domino’s Pure Cane sugar. Thought I had made paint remover... as time went on I discovered it was quite good. After it cellared in the basement a few years. Continued home brewing wine while at flight school in Mineral Wells, TX in 1970. Started home brewing beer in 1986 in Florida. Joined Institute for Brewing studies to get New Brewer Magazine. I was intrigued by the possibilities of putting my day job as a restaurant contractor into play with brewing equipment. Built my own all grain tier system in 1994, I called it the Brew Cactus. It was for my garage brewhouse (See article on it in August 1996 issue of Brew Your Own magazine page 38-42). Put together a refrigerator with temperature contoller for use as a combo primary and secondary fermenter. When the head brewer at local brewpub I was helping moved to Toledo, I had no choice but start my own micro brewery so I could have the brewing therapy I needed.

If you will, a brief history of your brewing experience (where have you brewed)?

At home and as Assistant to Norman “Brewdude” Dixon at Brooker Creek Brewery, Palm Harbor, Florida. Then started the Dunedin Brewery, Dunedin, Florida

How large is the brewery your currently brew for (# of barrels)?

Is it automated or is there a lot of exercise involved in your brewery's operation?

All hands on. One former head brewer lost over 25 lb in his first two weeks.

Are you responsible for giving the brewery tours?  If so, what would you like the tour guests NOT to do?

If I am in house I will. If not, head brewer, assistant brewer, pub manager or taptender steps in. What we would like a tour guest NOT to do….. hum… only thing I can think of is maybe fall asleep. All else is good. It’s their tour.

Ever had a bad batch?

One--with home brew that ended sour--, and another when commercial brewing the first year, we re-pitched #007 German Ale yeast once to many times. It ended up tasting more like a Belgian Style Gold, and customers welcomed the new taste and didn't let it go to waste.

If so, how long did it take you to figure out what caused it?

The home brew was found when I opened the bottles, beer gushed out and completely emptied the bottle. I tasted what little was left so I could learn something, I couldn’t try a beer for over a month after that taste. The commercial batch was noticed as soon as we tasted it in brite beer tank after two days.

Do you get to name the brews or is it done by committee or dictatorship?

I named our Flagship beers (Piper's Pale Ale, Beach Tale Brown Ale, Celtic Gold Ale, etc.), but our latest brews on tap in the Pub, such as the Hoppy Hippie Weizen, have been named by the brewery crew.

What are your favorite styles?

All styles are good. Out-of styles are my favorites. Like abstract paintings, you have to get into the head of the artist to see what’s going on. 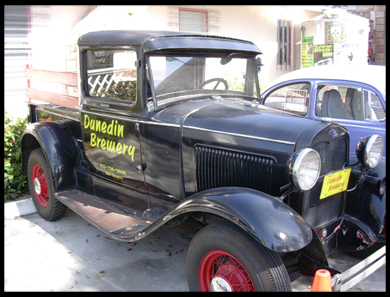 Do you get to work on them at your current brewery?

Yes, it is a historical priority for us.

Brewery attends GABF when we can, Volunteered at Oregon Brewers Festival, and attended the Telluride Brews and Blues twice. It’s all good stuff and good people.

Best beer in Florida for our Pipers Pale Ale, and a 1998 World Beer Championships Silver Medal in the Scotch Ale category for our Highland Games Ale. Also numerous BFBC medals for our other brands.

Can you give a hint if anything might be coming from your brewery (new brew, special brew, etc.)?

A new small-batch series in 22 oz bottles and more wood-aged brews like we did in 2000 when we aged a barley wine until it soured like a West Flanders Red. Keep your eyes on us, we are on the move again.

No wavering here, fruit in the beer (either while brewing or when drinking), yes or no?

We did our first Peach Wheat in 1997 that is still one of our flagships. We do a Razzbeery, and once made a Pomegranate and Watermelon that was consumed quickly. More to come in limited release 22 oz bottles.

Any advice for those aspiring (kitchen) brewmasters out there?

Just keep believing in making others happy by brewing creative malt beverages, and the world is yours. No matter what challenges you face, the beer and its friends will get you through. Nothing is wrong with teaching yourself, and never quit chasing knowledge.

I love where Craft Brewinghas brought us all and look forward to where we are all going with it in the future.