Beer bloggers are a lucky lot.  They get to enjoy their subject (beer and the drinking of beer) and at the same time chronicle the event.  Our next blogger in the spotlight hails from Great Britain, but he has a decidedly worldly beer palate.  Having a look at his blog, one can definitely tell that he loves his subject and if one has followed him on Twitter for any period of time, he has no problem doing research.  Please welcome to the Comfy Computer Chair of Fame - Phil (last name withheld to protect the innocent, the innocent what, we're not sure of). 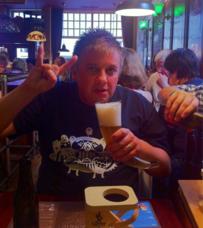 When did your blog start? Roughly Feb 2010

What got you into blogging about beer?
To be honest I started doing wine reviews first, although very much a novice and not on a blog on the sellers website, then I discovered or re-discovered beer and how I’d managed to miss what was going on around me. The wife bought me a book called “100 Belgian Beers To Try Before You Die” and I set about finding them and posting the info on Facebook, a friend said “why don’t you start a beer blog?”
I said a what??
The rest as they say is history…

Is beer the only thing you blog about?
Pretty much but not just beer reviews, beer and food, beer places, events, festivals, anything relatively beery.. (I think you get the picture)

Outside of your blog, do you write for anything else (newspapers, magazines, etc)?
Nah, nobody wants me.

Any formal writing training? School, Internship, etc.
I wrote a poem once in primary school, does that count?

Do you just write about beer or do you have other beer pursuits?
I love Quantum Physics (and brewery), plus the works of Galileo Galilei and Stephen Hawking. I like nothing more than to spend hours writing detailed papers trying to lay out my own personal understanding of the universe.

Do you attend any of the big beer festivals/conferences? If so, do you stay to yourself or join other bloggers? 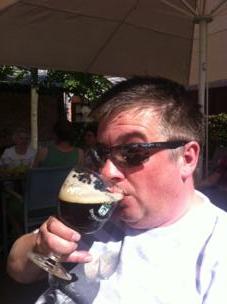 I attended the European Beer Bloggers Conference this year in Leeds UK, it was a fantastic experience I loved every second. I try to get to as many festivals, beer launches and meet the brewer events as I can, but sadly time and money has it’s constraints.

Do I stay to myself, nah, I’m an in your face, I wanna be involved type, beer is my social lubricant, hehehe..

What do you think of the growth in the amount of individuals now interested in both beer and writing about beer?
I think it’s brilliant although sometimes hard to keep up. I’ve learned so much from reading blogs and meeting the great people who write them. The more the merrier I’d say, the quality will find a level and some will rise above it, some will fall away..

Are you published? IE. Anything we can buy and read?
Other than my works on modern science and the universe.…? No unfortunately not.

In the kitchen I make a mean? (beer related food)
Mmmm, I love cooking with beer. I like chilli made with Chimay, Bamberg Pulled Pork made with Schlenkerla Smoked Beer (see beerreviews.co.uk recipe by Leigh of goodbeergoodfood.wordpress.com) that is awesome.

I also like my own twist on Coq Au Vin which substitutes beer for wine, it’s delicious, I made mine with a Ginger Tom (Coq au Tom Recipe) a version of Robinsons strong dark ale Old Tom. But anything similar would work.

Do you have a preferred/favorite beer style?
I love Belgian beers particularly strong dark quads and Trappist varieties, but also Saisons and other styles too, trying to get more into Lambics etc.
I’m also massively into big hoppy IPA’s from both sides of the Atlantic. I discovered real American beer about 18 months ago and love the influence it’s having on UK brewers. Barley Wine is a style I’ve most recently got into, massive beers, mahoosive flavours..

Please put your beer judge hat on and describe your favorite beer of all time (still existing or not):
Impossible to say, I’ve covered this so many times in post of my own or replying to others, but here’s my take on The Session posted some time ago

Any advice to would be beer bloggers?
• Be yourself, write what you think but be careful not to publicly slay a beer, brewery, brewer based on your opinion as it is only your opinion.
• Don’t be upset if at first nobody visits or comments, build it, they will come..
• Last and most importantly enjoy beer and blogging, both should be fun, if it’s not, stop, you’re doing it all wrong…

If you could sit down with anyone in the beer industry (living or dead), who would it be and why?
Not particularly a beer industry person, I speak to loads of them, but a long series of British chancellors of the Exchequer, past, present and future.

What would be the first question you asked them?
I’d ask them why they have continually screwed the British beer industry and drinking public over as an easy target for years as an easy target. Watching businesses fold while wasting the cash scraped from us all on ridiculous tin pot projects

If you were omnipotent, what would you change in the beer universe?
The taxation issues for a start. But…
I’d love to see keg dispense embraced by the British public more, as it is across Europe and the USA. For petty arguments about dispense method to be put aside letting the drinker choose which they prefer to drink at any given time. This answer is pretty UK centric I know but I want to walk into any bar, pub or festival and be able to get a wide range of options, not just cask ales and bottles.
For beer to live together in peace and harmony etc etc etc forever..
Oh and transatlantic beer lines directly from the USA

Two favourite breweries (at least 1 domestic and 1 foreign)?
I really hate questions like this as there are so many, that are so good it’s impossible to choose, but I’ll pick some that are currently up there as doing great things.
UK – Summer Wine Brewery as they always seem to have some crackpot idea up their collective sleeves, great guys too. Closely followed by Buxton, Magic Rock, Kernel, Hardknott, Brodies, Red Willow etc etc (I could go on and on)
Foreign – Brouwerij De Molen, again adventurous beers that generally rock! (Plus many many more)

Favourite foreign beer?
Sticking with the above theme….
De Molen – Hel and Verdoemenis (Hell and Damnation) It’s absolutely stunning!
I love Green Flash West Coast IPA at the other end of the spectrum.

Q: Could you please elaborate on the above statement, preferably with pictures?

A: In the UK the word growler means something COMPLETELY different to the USA definition. (Google it for the UK slang)