A Visit To Bhramari Brewing Company 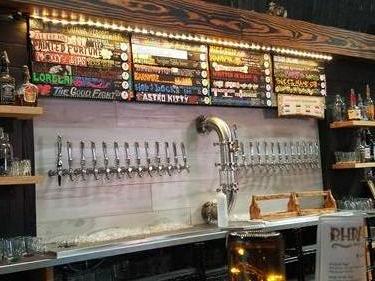 I recently had the opportunity to stop in at Bhramari Brewing Company during a recent visit to Asheville, North Carolina while my daughter worked at a wedding in town.

I would have to say that I quite enjoyed myself. Saturday afternoon, taproom not too busy (but I could see it becoming very busy later in the day). The building itself it quite large and broken into different seating sections. Plenty of seating is available around the taps as well as there being a quite large patio and another section the encompasses another corner of the bulding.

The brewery's beer selection was quite extensive and there were also other alcoholic options (mixed drinks) available. There were two things that caught my eye about the Bhramari taproom though. The first thing that I noticed was that the brewery not only had the standard 5+% beers, but a beer that you don't see very often. Chair, a 3% Belgian Table beer. Table beers have all but vanished and it was nice to see a try at what was made for centuries for common folk. The other thing I found interesting was the ability to order a 'half'. Instead of having to order a full pint of a particular beer, you could order just a half pint (this was not available for all beers). I have been in myriad taprooms in the US in the last 20 years, but could count on two hands how many offered this size choice.

There is a menu available for food choices (I won't recite the whole thing). I'll just say that the Spent Grain Pretzel that I had (with mustard, honey and jalapeno cheese) was very good and I think would go right with a majority of the beers on offer.  Service was friendly and quick.

Beers had: Astro Kitty, Blackberry Fluff and a half of Bumblestick