It was a dark and stormy night...as it usually is in London in late February.

There we were, one floor deep in the London Underground, with nothing but our thirst, a day pass and some pounds.

A shot rang out...No, no, that was a taxi backfiring.  Standing outside the Euston Tube stop, wondering if we would ever be able
to find a pub before closing time.

Our journey had started much earlier (actually about three weeks earlier when the author had asked the #beer Twitterverse for suggestions on can't miss pub stops in London and vicinity). The name Euston Tap seemed to be at the top of everyones list of pubs to visit while in the city. So there we were, just outside the Euston Underground station, wondering where this elusive taphouse/pub was. From a distance we spotted what we thought were people outside a building at tables under an umbrella. Thinking that this might be a place to find food (we were hungry too), we started walking in that direction.  By blind luck we had happened upon the Euston Tap. 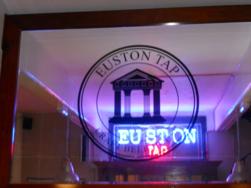 The Euston Tap is unlike any other taphouse/pub that we visited while in London (and we visited numerous).  First and foremost is its unique architecture. Unlike most of the pubs we visited, situated comfortably in the middle of a city block or on a corner, the Euston Tap stands alone. The Tap, inhabits what was originally the Western Lodge (the original entrance to the Euston Railway station (since demolished)). It stand over 70 feet high (two floors), with a circular staircase for entrance to the second floor.  There was also a small seating area outside and the bar met you as you walked through the front doors.

Though not big on the outside, there were big things going on inside.  Welcomed at the bar by Eve, we were asked what every thirsty man likes to hear, "What can I get you?".  Simple question you might say, but not so simple at the Tap.  You see, unlike the other pubs we visited, the Tap tries to have 8 different cask ales, as well as 20 keg beers and 100 to 150 bottle beers available.  So, choosing is anything but easy.  The cask ales were your traditional English pales and India pales. The kegs ran the gamut from American craft to Belgian Lambic to German Weizenbock.  Let's just say that the bottle selection at the Tap was better than this author has seen at almost any other bar/pub he has visited (in either the United States or Great Britain).  Just imagine going to a dedicated beer store and selecting only your favorites.  The Tap seemed to have them all.

Being in Britain, it seemed only right to order a cask ale first.  For me it was a Dark Star Espresso.  My two traveling companions each ordered a traditional pale ale.  Settling into a seat at the bar, we talked about our plans for the next few days (a trip to Edinburgh) and where and when to meet for the trip.  All the while we were taking in the unique building.  A copy of the original plans hung on the wall, various other pictures and mirrors were about.  While we were acquainting ourselves with the downstairs area, the buzz at the Tap seemed to be coming from upstairs, at least this night.  As the night was coming to a close, I was quite impressed by the patrons coming down the circular staircase with nary a slip or wobble among them.  This was quite a feat as there were a few that were 3/4 pissed. 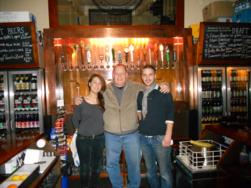 Alas, it seemed that we had arrived just about 1/2 hour before closing time at the Tap. As we went about finishing our second pints (my was a Schneider Aventinus from the tap), Tony and Eve went about cleaning and straightening to prepare for the next days crowd.  Our tap masters were wonderful.  They not only poured excellent ales, but were more than willing to answer whatever questions we might pose as to the Tap or the beer culture in London in general.  The Tap was not a "corporate" taphouse/pub like countless others you will find in London (or Great Britain for that matter).  It has a style and vibe all its own.

If you happen to be in London on a dark and stormy night, give the Tap a visit.  My next visit will start there.

Thanks to @MelissaCole.  She was the first to suggest the Tap.