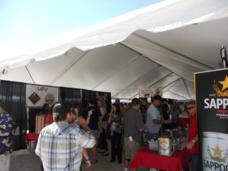 When should the term "world" apply when referencing what constitutes the breadth of a particular item?  In this case I am speaking of beer.

Having just attended the 16th World Beer Festival in Durham, NC (by All About Beer magazine), I began to wonder if the name was implying too much.  The craft beer community knows the quintessential countries of beer.  Having brewed beers far longer than the United States has existed, these countries are the place in which most US brewing styles and techniques originated.  Countries like England, Belgium and Germany, to say nothing of Czech are the hallmarks of beer.  The birthplaces of styles and techniques, innovation and expanding reach.

You see, the World Beer Festival paid scant attention to these countries.  Walking the grounds of the festival, I could count on one hand the number of Belgian brewers represented.  It was the first beer festival that I have attended that the Japanese breweries outnumbered those from Germany (home to more than 1000 breweries).  England did not have very much representation either, but for a few breweries thrown together at single tables.

I don't hasten to know what the organizers have to go through to lure breweries, or at least the distributors for the various countries, but it seems that they may have taken this festival off.  A festival without a Belgian Trappist beer, no English Pale or Mild and very little in the German stalwarts like Dunkles or Bock.  Are there too many festivals for these distributors to choose from now?  Are they experiencing festival overload?  Who's to say.  It was just very disappointing to have spend my entry fee only to experience readily available beers.  I have nothing against American beers (there are fantastic American beers) but there is a beer world outside the US.  That "world" just wasn't present this time. 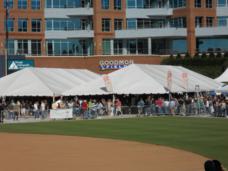 The festival did have a nice feature.  The organizers grouped all the North Carolina brewers in one section.  I thought that was a great idea for showcasing the native breweries and giving patrons the ability to find their locals without slogging through the entire festival grounds.  Well done.

As for returning to that festival in the future.  I will all depend on how the "World" is put together I guess.