A Man in His Element

Who better to meet and greet at your local home brew shop than a man intimately familiar with the crafting and brewing of great beers.  Noted beer author and a long time fixture in the beer community, Ray 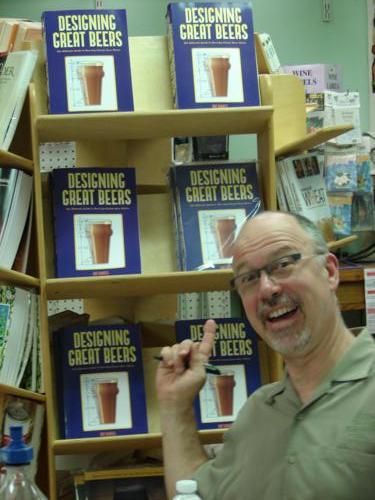 Daniels, visited American Brewmaster in Raleigh, NC to chat and sign copies of his beer best seller, Designing Great Beers. Mr. Daniels is a well-respected authority in the beer and brewing community, is an instructor at the Siebel Institute of Brewing Technology, and is the man behind the Cicerone Certification Program.

He took the time to sign a few books for some of the avid home brewers that stopped by to meet him and spoke a little bit about the evolution of his major project, the Cicerone Certification Program.  For those unfamiliar with this program, (From the Cicerone.org website),

{xtypo_quote}Cicerone is an English word referring to “one who conducts visitors and sightseers to museums and explains matters of archaeological, antiquarian, historic or artistic interest.”  For beer, a Cicerone will possess the knowledge and skills to guide those interested in beer culture, including its historic and artistic aspects.  “Cicerone” now designates a person with demonstrated expertise in beer who can guide consumers to enjoyable and high-quality experiences with great beer.{/xtypo_quote}

The program organizes the certification exams and provides training in the disciplines needed to pass the tests.  The latest addition to this, according to Mr. Daniels, has been the introduction of web based instruction.  Saving both time and costs (travel and other expenses), this is something that he is looking to expand on in the near future.

The author also spoke about his background in the publishing business and other beer luminaries that he has had the opportunity to meet and become familiar with.  Although he could have spent many hours with stories from his time in the beer and brewing industry, this was his second stop of the day and alas he had leave the confines of the brew shop.

Pick up a copy of his book and head to your local home brew shop and get started designing your own great beers.