The original Port Townsend Brewing Company was established in 1905,  but fell victim to Washington state's prohibition initiative of 1914 (that went into effect in 1916).  The brewery tried to continue by making a line of non-alcoholic beverages, but was unable to remain a going concern shortly after 1916.

The modern brewery was established in 1997 and when the doors opened was producing only two beers.  The brewery currently brews more than 10 beers.  The growth rate of the brewery has necessitated the expansion of almost all pieces of equipment.  In order to keep up with increased demand, the brewery's beer garden has also been expanded (with additional seating, a bandstand and outdoor heaters).

When the modern brewery began, Port Townsend was only bottling two beers.  In 2003, they began the bottling of all 10 of their existing beers.

I first learned of Port Townsend Brewing during one of my frequent?... no, many?... no, regular? Um... let's just during one of my trips to Gravity Beer Market in Olympia. Hop Diggity, there flagship bottled IPA caught my eye. A local (Washington) beer boasting a big hop character. How could I pass it up? I found them on Twitter and occasionally tweeted with them or posted an @untappd mini-review of one of their other beers.

Last fall I began writing some beer reviews for @FoodbeatNW, and Port Townsend was my first victim... er... subject.  For a long time, I thought they had only a handful of beers, but in February, I decided to check out Strange Brewfest in Port Townsend, and I stopped by the brewery.

I was amazed at what they have going on there. It is a very small space and includes a taproom at one end of the building. At the other end of the building is an outdoor seating area and a covered stage where they host musical acts in the summer months. For being small, it is a busy little piece of real estate. The really cool thing is the beers they're bottling don't begin to represent the diversity and quality they have in the taproom.

If you get a chance to get up to Port Townsend on Washington's Olympic Peninsula, I highly recommend stopping by and trying one of the many beers they have on tap. Carter applies a deft hand to his hops, and if you're a hophead, you won't be disappointed. If you like the maltier (read, "less hoppy") styles, too, you won't be disappointed, either. As easy as they are to get to--they're right on the main drag through Port Townsend--you'd be doing yourself a disservice not to visit.

Thanks for the suggestion Bill!

Port Townsend's beers have already been added to the CellarMonk Beer Database.  Have a look at them, and if you like, go ahead and register and review them.  About mid-June we will be posting an interview with Port Townsend Head Brewer Carter Camp.  We will be working with Port Townsend to provide an inside look at this wonderful brewery and it people. 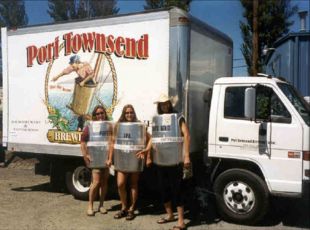