The Basics of Cask Ale

There has been an explosion in America of the introduction of cask ale offerings from craft brewers (usually local brewers).  For those uninitiated, we thought we'd put together a small primer on the basics of cask ale.  Hopefully this will help if you just happen to run across a cask ale offering at a local taproom or you happen to be traveling in the United Kingdom.

Cask ale is also called cask-conditioned beer (very similar to bottle conditioning of beer). It is unpasteurized, unfiltered beer which is 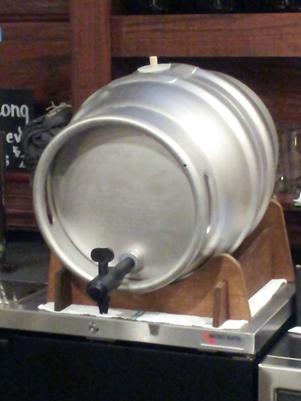 served from the same cask in which it was conditioned including secondary fermentation. This secondary fermentation in the cask is where the beer will produce all the carbonation that it will eventually have.  Priming sugar and finings (filter agents) may be be added at filling to aid in the production of carbonating gas and clarity in the beer. Once the beer is finished the casks can be stored on their sides or on their ends.

“Cask” originally referred to a wooden container held by iron loops.  Most cask ale is now delivered in metal cask or plastic casks due to their durability during shipment and storage and their practicality overall. Once a cask has been delivered from the brewer to the publican, it is the publican's knowledge of his wares that will decide when each cask will be tapped (some casks may need extra time to fully condition to the publicans taste). There are a number of pub chains that actively have "Cask Master" programs for the continued cask education of the publican.

Firkin – This is the cask or barrel.  Historically made of wood, but are now usually stainless steel or plastic.  They come in a variety of sizes.

Bung – The plastic or wood stoppers used to plug the bung holes of the firkin after fill-up.

Spile – A wooden peg pounded through the shive bung that allows excess CO2 to vent, and air to flow in as the beer is drawn out of the firkin.  There are two different types (think hard or soft) depending on the amount of gases that are needed to pass through the bung.

Keystone Bung – The bung at the front bottom of the firkin through which the tap is pounded so you can pour out the beer.

Tap – The spout/spigot that is pounded through the keystone and allows the beer to drain out of the firkin.

Beer Engine - A beer engine is a device for pumping beer, originally manually operated and typically used to dispense beer from a cask or container in a pub's basement or cellar. 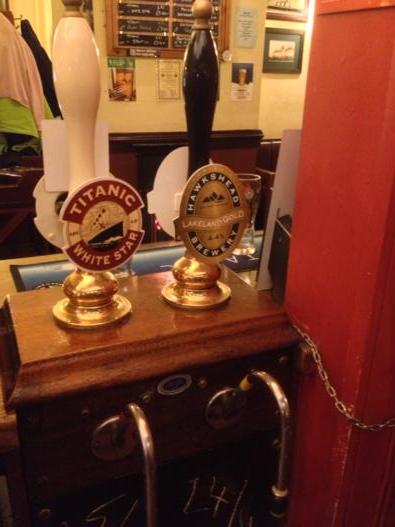 "My beer is warm" - Cask ale was created and refined to be drank at common cellar temperatures (55 to 60 degrees).  This runs counter to contemporary beer advertising that projects beer being at its best as cold as you can get it (think "cold filtered" or "frost brewed").  At this slightly higher temperature, more of the beer's nuances can be enjoyed (the aroma, the taste, the mouthfeel, etc).

"My beer is flat" - Cask ale are special beers.  The typical keg is filled with already carbonated beer (or carbonation is forced in).  Cask ales on the other hand do their own carbonating.  Because this process cannot be controlled within the cask after filling, the beer from a cask will seem not as carbonated as the same beer from a CO2 pressurized keg.  If you are used to carbonated drinks - keg beer, bottled beer, sparkling water, cola, etc - the mouth-feel of a cask ale may seem a little strange - even flat or boring - at first.

"There is little to no head on my beer" - Depending in the dispensing method, cask ale will not have as hearty a head as a beer poured from a pressurized keg.  From the tap (gravity), the head will depend on how much secondary fermentation added to the volume of CO2 in the beer.  When poured through a beer engine/hand-pump (when fitted with a sparkler, a nozzle containing small holes)  the beer aerates as it enters the glass, giving a frothier head.

"My beer isn't clear" - Cask ale is typically drawn (in the US) from the fermenter prior to filtering.  This tends to leave some yeast in solution.  Also, other adjuncts that the brewer adds to the cask many play a part.  Finally, handling and setup is important.  Most serving cask ale will place the cask and let it rest long before they serve it.  This give those particulates that are still in suspension time to fall out (go to the bottom of the cask).  This can take a while and may not have completely settle out before serving.  Not to worry, the cloudiness should not have an affect on the overall product.

The natural, fresh and satisfying nature of the mouth-feel of a cask ale has been compared to the difference between fresh coffee from the local coffee-shop and instant coffee made at home.  A person will be enjoying a beverage in its more natural state.  The changes being made to the beer in the cask are there by the design of the brewer (by varying ingredients and additives (hops, cocoa, etc)).  This is not quite the same as kegged beer as these are made to standards, almost a commodity item and the kegging of beer does not allow for additives after kegging.

For more information on Cask Ale/Real Ale visit the website of the Campaign for Real Ale (CAMRA).