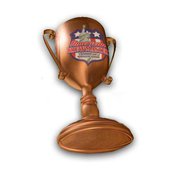 Some final preparations for the upcoming Piedmont Brewers Cup took place on Tuesday, Oct 18th.  The competition coordinatior, John Federal, led a group of about eight others in the collection, check-in, seperation and sorting of the multitude of entries to this years competition.

Entries came from across North Carolina and the surrounding states, some from even further away.  The entries had to adhere to some standards of competition (bottle size, cap markings, bottle shape), but not all would make the cut.  The reason for this is simple.  The competition entries, once they are checked-in (entry fee paid), are seperated into their appropriate style category.  Once this is done, organizers go through and label each bottle with its entry number and category.  At that point the entry's personal information (name, phone #, etc.) are stripped off and the bottle at this point becomes anonymous.  If wrong size bottles or distiguisable caps were allowed, those bottles could be recognizable.  The judging is meant to be blind.  The process described above looks to ensure this.

The judging will and awards ceremony for this years competition will take place at Big Boss Brewery in Raleigh, NC on Saturday Oct. 22nd.  Judging will begin at around 8:30 on the morning and will go until around 5 in the afternoon (this includes all judging to determine Best of Show).  The awards ceremony is set to start at 6:30PM.  There will be Big Boss beer for sale in the taproom to slake your thirst for craft beer. Slippin' Sliders will be there with their wonderful sliders to fill your belly as well!

The competition this year has more than 33 sponsors.  Most in the brewing industry, but there were also a number of dining establisments that are associate sponsors.

Come on out and watch as the beers are judged.  If the taproom is open, head on up for a nice cold Big Boss beer.