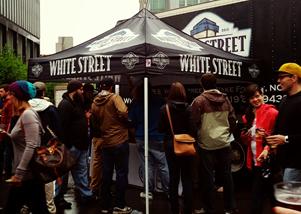 As for the bands, we cannot really say much. My daughter and I spent most of our time wondering all of Raleigh's City Plaza taking in the beers, bobbles and boisterous people we were surrounded by. We could hear the bands all around, but really were not there to enjoy them. We were there to catch up on the NC brewing scene. Brewgaloo was an fantastic way to be able to do that, right in our own back yard (so to speak).

The bad/unfortunate. For one, it was raining, but as the organizers were not in control of the weather, this was just something fest goers had to muddle/puddle through. The other problem that a good number of festival goers encountered was exceedingly long lines for those who had prepurchased tokens online and had to wait in the "will call" line to pick them up. Having orgainized competitions and been part of festival crews in the past, this was a situation that is very hard to control. Since the festival was schedule for almost eight hours (2 - 10PM), there is really no way to judge when people with arrive (there was a large number arriving just after the start). This is a live & learn problem. As this festival is only a few years old, this type of problem will be worked out in after action meetings. Please do not hammer the festival organizers as we know they were working as hard as possible to remedy the issues. 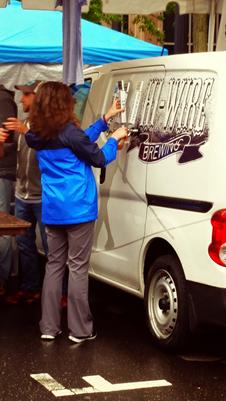